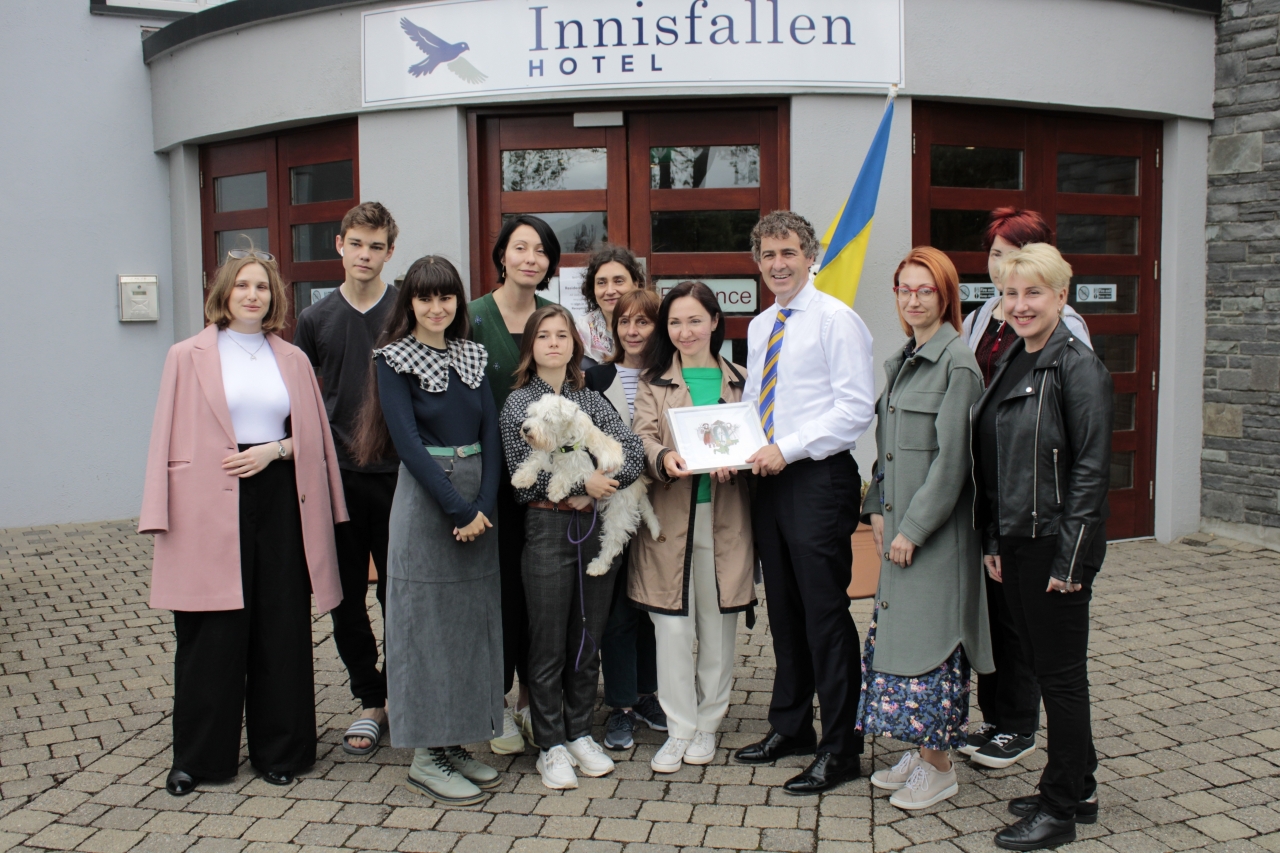 Senator Mark Daly visited Ukrainians in the Innisfallen Hotel who are temporarily protected by Ireland due to the war against Ukraine.

Ukrainians from Killarney previously invited the senator to the K-Fest Festival, where they organised a day of Ukrainian culture.

The senator talked to Ukrainians in an informal atmosphere. The key issues raised by the newcomers to Ireland were the introduction of simplified procedures for the recognition of Ukrainian diplomas in Ireland, the access of young people to higher education and the creation of additional housing for Ukrainians.

"Among the newly arrived Ukrainians there are many highly qualified people, such as doctors, teachers, psychologists, lawyers," Natalya Krasnenkova, local community coordinator, said.

"All of them can and want to work in specialties that contribute to the Irish economy and fill existing vacancies. But now the confirmation of Ukrainian diplomas is long and bureaucratic, which rejects our fellow citizens to low-paid working specialties. For example, a family medicine hospital director with 20 years of experience is forced to work as a waitress, while Killarney lacks doctors. Or we see a lot of vacant truck drivers, but no one knows how a Ukrainian driver can reschedule driving training to work."

The senator promised to do everything possible so that Ukrainian specialists can get involved in the economy as soon as possible.

In addition, Ukrainians have talked about higher education, as Ukrainian students who are not EU citizens have to pay a high price for tuition from €16,000 to €40,000 per year. It also narrows opportunities for talented and motivated young people.

"Today, Ireland is in dire need of housing, even for its fellow citizens. Therefore, after some time, the pressure on the housing market will increase, when all 33,000 newly arrived Ukrainians will leave temporary shelters or hotels, and will look for the potential to rent accommodation. Ireland should now think about creating modular houses or other options for fast housing," said the Ukrainians.

As a token of gratitude for Senator Daly's continued support, Ukrainians presented him with the work of young Ukrainian artist Anastasia Shkurko 'Ukrainian Phoenix Remembrance'. The work is dedicated to Ukrainian women who have suffered from torture, mass rape and other crimes committed by Russian troops in Ukraine.

"Impersonal images of women in national costumes symbolise Ukrainian women victims of the Russian-Ukrainian war. The pitchfork in their hands means the impossibility of forgiving crimes against humanity.
Nevertheless, I believe that these Ukrainian phoenixes will be reborn and find their peace of mind. I hope that the presented picture draws attention to the topic of crimes against civilians." Senator Mark Daly promises to put this work in his office.

In all, since the beginning of the war, Ireland has received more than 33,000 Ukrainian refugees. 1,900 of them are in Killarney. Senator Mark Daly is a lobbyist on the Ukrainian issue. One week ago, he submitted to the Senate a resolution recognising the genocide status of Russia's aggression against Ukraine and called for Ukraine to be a candidate for EU membership.