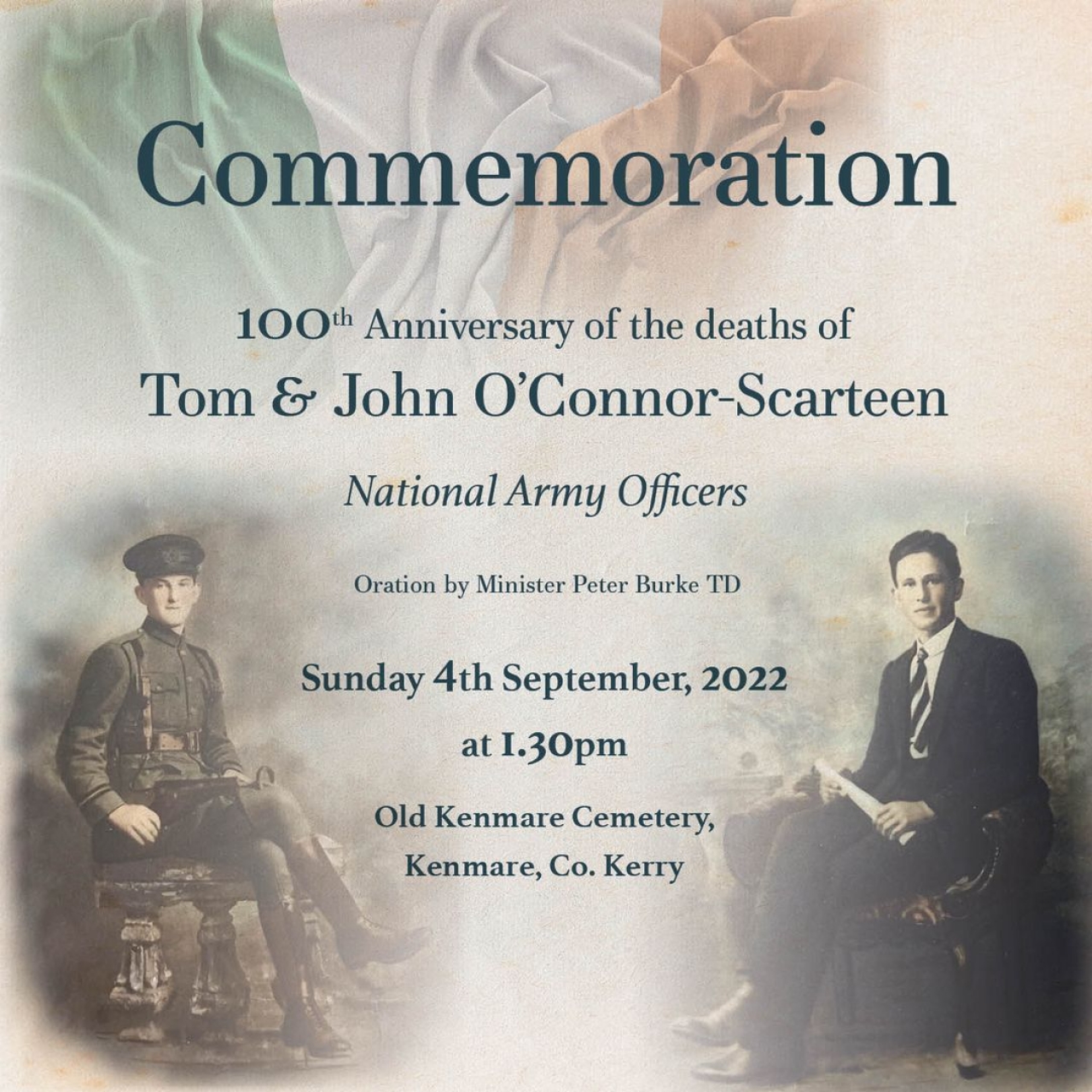 ANNIVERSARY: A commemoration of the 100th anniversary of the deaths of Tom and John O’Connor-Scarteen will take place in September.

Next month marks 100 years since the deaths of National Army Officers Tom and John O’Connor-Scarteen and a special commemoration is being planned.

The public are invited to a gathering in Old Kenmare Cemetery to remember Tom and John O’Connor-Scarteen on Sunday September 4 at 1.30pm where they'll be an oration by Minister Peter Burke TD.

The brothers grew up on a farm at Scarteen, Blackwater, between Sneem and Templenoe. They adopted the name ‘Scarteen’ after the townland. Their parents Michael and Deborah owned and operated a bakery and grocery shop at 5 Main Street, Kenmare.

Tom and John were both active members of the Irish Republican Army and fought in many engagements against the Crown Forces during the War of Independence between 1919 and 1921. Tom played a prominent role in the Headford Junction Ambush, Killarney in 1921, one of the major incidents of the Anglo-Irish War.
The Treaty which followed the end of the war and which was signed in December 1921 divided Ireland. The terms of the agreement split the Irish Republican Army, Sinn Féin and the wider community. It also divided Dáil Éireann but a majority of members, 64, voted in favour, with 57 against. Three Kerry TDs voted for the Treaty and three voted against. Michael Collins became the leader of the Pro-Treaty faction and Éamon de Valera became head of the anti-Treatyites.

Tom and John O’Connor Scarteen were among those who listened to Michael Collins speaking at a Pro-Treaty meeting in Killarney in April 1922 and they were motivated to join the new army of the Free State. They, along with other local lads, enlisted in the army on their return to Kenmare. As experienced combatants during the War of Independence, they rose through the ranks, Tom to the rank of Brigadier General and John to the rank of Captain.

The bitter divisions over the Treaty led to the outbreak of the Civil War which began on June 28 1922 when the Provisional Government launched an assault on the Four Courts in Dublin which had been occupied by anti-Treaty republicans for several weeks. Among those fighting in Dublin when the war began were the Scarteen brothers.

Kenmare was among the large towns in Kerry which came under the control of the Free State Army during August 1922. The O’Connor-Scarteens led a large landing of over 200 troops by boat at Kenmare on August 11 and seized control of the town. Many local men enlisted under their command. A few days later, Tom commanded a seaborne army detachment which captured Cahersiveen and Waterville.

Anti-Treaty forces in south Kerry launched an audacious attempt to recapture Kenmare on September 9 1922. As the republican assault on Kenmare began, at about 7am a group of Anti-Treatyites burst into the bakery owned by the O’Connor-Scarteen family at 5 Main Street. Tom and John were asleep in their beds upstairs. The sentries keeping an eye out for Anti-Treatyites had earlier been sent home. It was a premeditated attack: it was later claimed that the local IRA had ‘cast lots’ to decide who would carry out the killings.

The shooting of the Scarteen brothers took place within weeks of the deaths of Michael Collins. The incident resonated beyond Kenmare and beyond the confines of the Civil War.

The funerals which followed saw the town come to a standstill.

The Scarteens were among approximately 175 people who died in the Civil War in Kerry which claimed the lives of almost 90 Pro-Treaty National Army soldiers, over 70 Anti-Treaty IRA, and 15 civilians.

Politically, the death of the Scarteens would remain to the fore in the history and politics of the county for over a century, with two of their brothers, a nephew and a grand-nephew all serving in either local or national politics as representatives of Fine Gael.