SCOTTS LAKERS will be hoping to start their Division 1B campaign off right with the National League: Division 1B game against LIT Celtics tomorrow, Saturday, January 13, at 7.30pm in Killarney Sports & Leisure Centre.

This weekend’s clash marks the beginning of the second half of the season for the Scotts Lakers. Their 10th place finish in Division 1 means that they’ll be operating in Division 1B from here on in along with LYIT Donegal, Kilkenny, the Dublin Lions, the Titans, Sligo and Saturday’s opponents, the LIT Celtics.

In an ideal world I’m sure the players would like to be mixing it with the big dogs in Division 1A but a stint in the second tier might not be a bad thing. It is, after all, the Lakers’ first season back at this level and with their points from the first half of campaign carrying over, they will fancy their chances of competing for the 1B title (aka The Shield).

They are currently third on 15 points, just three behind joint leaders LYIT and Kilkenny.

2. Can the Lakers put their cup disappointment behind them?

Hopes were high heading into last Saturday’s President’s Cup semi-final against Ballincollig but the Lakers fell to a disappointing 74-98 defeat. The victory over Fr Mathews in the previous round was probably the highlight of the season to date so to crash out so emphatically in the last four will have hurt the players.

They will be hoping to get their season back on track with a win this weekend.

A quick glance at the stats shows that there are a few areas that might need some tweaking as the Lakers enter the second phase of the season.

Only two teams in the entire fourteen-team league (the Titans and the Dublin Lions) have turned the ball over more frequently this season which is a worrying statistic. The Lakers also have the second worst blocks per game record which is surprising considering the size they have in the team.

They shoot the ball efficiently – 4th in field goal percentage and 6th in three-point percentage – but they’re 11th in both field goals attempted and three pointers attempted.

They’re also 11th in free throws attempted. Not getting to the line is often indicative of a team that doesn’t really attack the basket enough, which again is surprising when the Lakers often have big men like Pádraig Lucey, Andrew Fitzgerald and Antuan Bootle in their starting line-up.

All of this means that the points haven’t been easy to come by. They’re 10th in the league when it comes to scoring, averaging 77.2 points per game.

The addition of Dalian Mason, a guard who likes to shoot the ball, might correct these numbers a bit but I’m sure Cormac O’Donoghue will be hoping for an improvement on the offensive end from his team in 2018.

4. Lakers hoping to repeat the trick

The Lakers will be hoping for a repeat of the last meeting between the sides when they ran out 105-93 winners up in Limerick in September.

Justin Tuason top-scored for the Killarney club that day with 25 points while Mark Greene also chipped in with 22. LIT eventually went on to finish 11th in the league and are currently on a four-game losing streak. They have relied heavily on the scoring prowess of American sharpshooter Matt St Amour so the Lakers will need to find some way of stifling him. It’s easier said than done.

5. St Amour is capable of shooting the lights out

The 6’3” guard from Vermont has been electric so far this season. In his first three games he scored 56, 53 (against the Lakers) and 46, draining 27 threes from just 30 attempts.

His numbers have “dropped off” slightly since then but he has scored 30+ points in every single outing so far and is averaging a staggering 40.77 points per game. He is shooting over 60% from the field, 55% from three point land and 90% from the line. Crazy stuff.

You’d like to think that there’s no such thing as a one-man team but St Amour missed the Celtics’ last fixture of 2017 against Carlow. They lost 98-34.

It will be interesting to see whether or not the Lakers can contain him on Saturday. Either way, it could be a good show.

Road users are being advised to be extremely cautious during tomorrow’s Storm Barra after an Orange Weather Alert was issued for the county. According to Met Éireann, southerly winds which will later becoming north-westerly, will reach mean speeds of 65 to 80km/h with severe or damaging gusts of up to 130km/h, possibly higher in coastal […] 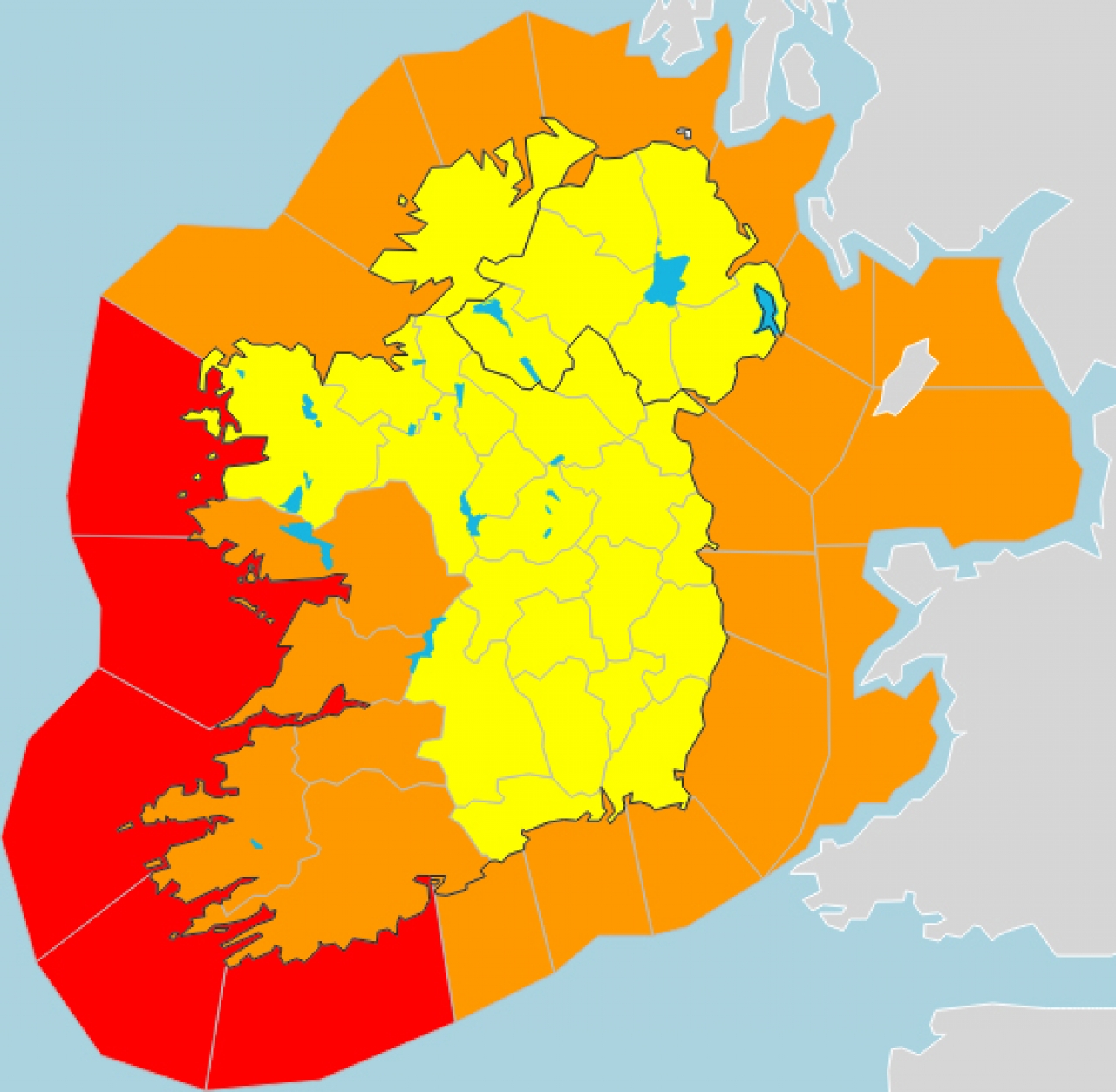 Road users are being advised to be extremely cautious during tomorrow’s Storm Barra after an Orange Weather Alert was issued for the county.

According to Met Éireann, southerly winds which will later becoming north-westerly, will reach mean speeds of 65 to 80km/h with severe or damaging gusts of up to 130km/h, possibly higher in coastal areas affecting Kerry, Clare, Cork, Galway, and Limerick.

A Yellow Warning has been issued for the rest of the country on Tuesday and for a time on Wednesday, as Storm Barra brings very strong winds and spells of heavy rain across Ireland. Heavy rain will bring localised flooding. There will also be a risk of coastal flooding on south and west coasts.

Road users in areas affected by the Orange Warning are advised to check local traffic and weather conditions before setting out on a journey.

The following advice is being given by the Road Safety Authority (RSA) to road users.

Control of a vehicle may be affected by strong cross winds, especially on exposed routes such as dual carriageways and motorways. High sided vehicles and motorcyclists are particularly vulnerable to strong winds.

Beware of objects being blown onto the road. Expect road conditions to change quickly in high winds so reduce your speed.

Watch out for falling/fallen debris on the road and vehicles veering across the road.

Drivers should allow extra space between themselves and vulnerable road users, such as cyclists and motorcyclists as they may be blown off course by strong winds.

Drivers need to slow down in wet weather conditions, to avoid the risk of aquaplaning. Drivers should also leave a bigger gap between themselves and the vehicle in front.

If the road ahead is flooded choose another route, do not attempt to drive through it. Flooded roads that appear shallow could be deeper than you think. They may also have trees or branches that have fallen that may not be visible.

After going through water, drive slowly with your foot on the brake pedal for a short distance – this helps to dry the brakes.

Drive with dipped headlights at all times.

Advice to pedestrians, cyclists and motorcyclists:

In areas affected by Orange Weather Warnings you should consider postponing your journey until conditions improve.

Visibility and light is reduced in poor weather conditions. Keep safe by making sure you can be seen. Wear bright clothing with reflective armbands or a reflective belt.

Take extra care when crossing the road or cycling in extremely windy conditions as a sudden gust of wind could blow you into the path of an oncoming vehicle.

Walk on a footpath where possible and not in the street. If there is a footpath and it is safe to use, look out for falling debris from above, especially in urban areas.

Walk on the right-hand side of the road, facing traffic if there are no footpaths.

Cyclist should ensure that they and their bike are visible to other road users by investing in a good set of front and rear lights (white at the front, red at the back) and by wearing clothes that help you be seen on your bike such as bright and light reflective items. 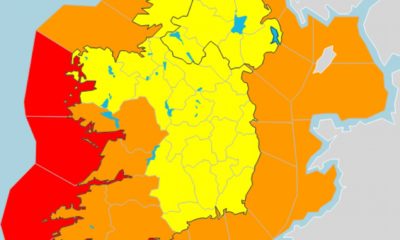 Road users are being advised to be extremely cautious during tomorrow’s Storm Barra after an Orange Weather Alert was issued...