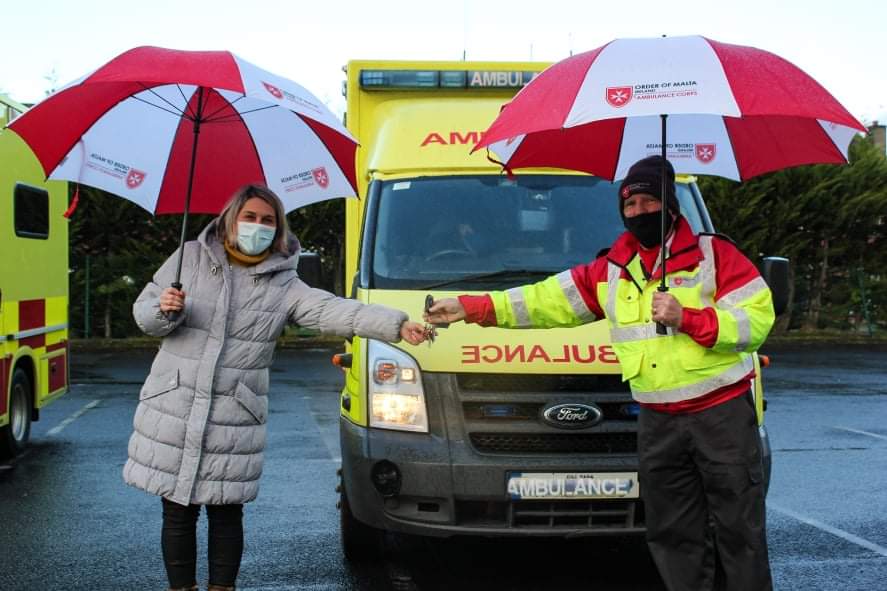 PRESENTATION: Anna Nesterova (Candle for Grace) accepts the keys of an ambulance from Joe Looney (Killarney Order of Malta).

An Order of Malta ambulance that served its time in Killarney is on its way to Chernobyl where it will enjoy a new lease of life.

The fully kitted out ambulance, which is surplus to requirements locally after a former a HSE ambulance replaced it, will now be used by hospitals in the Chernobyl area.

A Mayo-based charity called Candle of Grace organises the collection of much needed medical supplies to be used by local health facilities and orphanages near Chernobyl.

Throughout 2020 the Order of Malta Units based in Limerick, Nenagh and Thurles aided Candle of Grace with this collection.

During this process it was realised that there was a shortage of ambulances in the area and two end-of-life vehicles – one each in Killarney and Cashel – were identified and handed over just before Christmas.

Candle of Grace is now in the process of delivering them to Chernobyl.

"It is great to see surplus but still serviceable medical equipment given a new lease of life where it is most needed. It is anticipated that both of these ex-frontline vehicles can be put to good use to the people of the Chernobyl region in early 2021. A number of years ago our Killarney Unit facilitated a similar vehicle donation and we are delighted to help once again,” said the Order of Malta’s Assistant Commander Tony O’Mara.

Both vehicles laden with additional medical supplies, collected and donated by the Nenagh, Thurles and Limerick units of the Ambulance Corps, will be driven to the Chernobyl area by Candle of Grace volunteers in the coming days.

“We had a 2011 ambulance but it was in great condition and we really needed to find another home for it,” Joe Looney, Order of Malta – Killarney’s deputy officer in charge, told the Killarney Advertiser.

The Killarney branch will in turn take charge of a former NHS ambulance as the national fleet gets updated to modern vehicles.

New business is bang on trend

Council to get skates on for new amenity