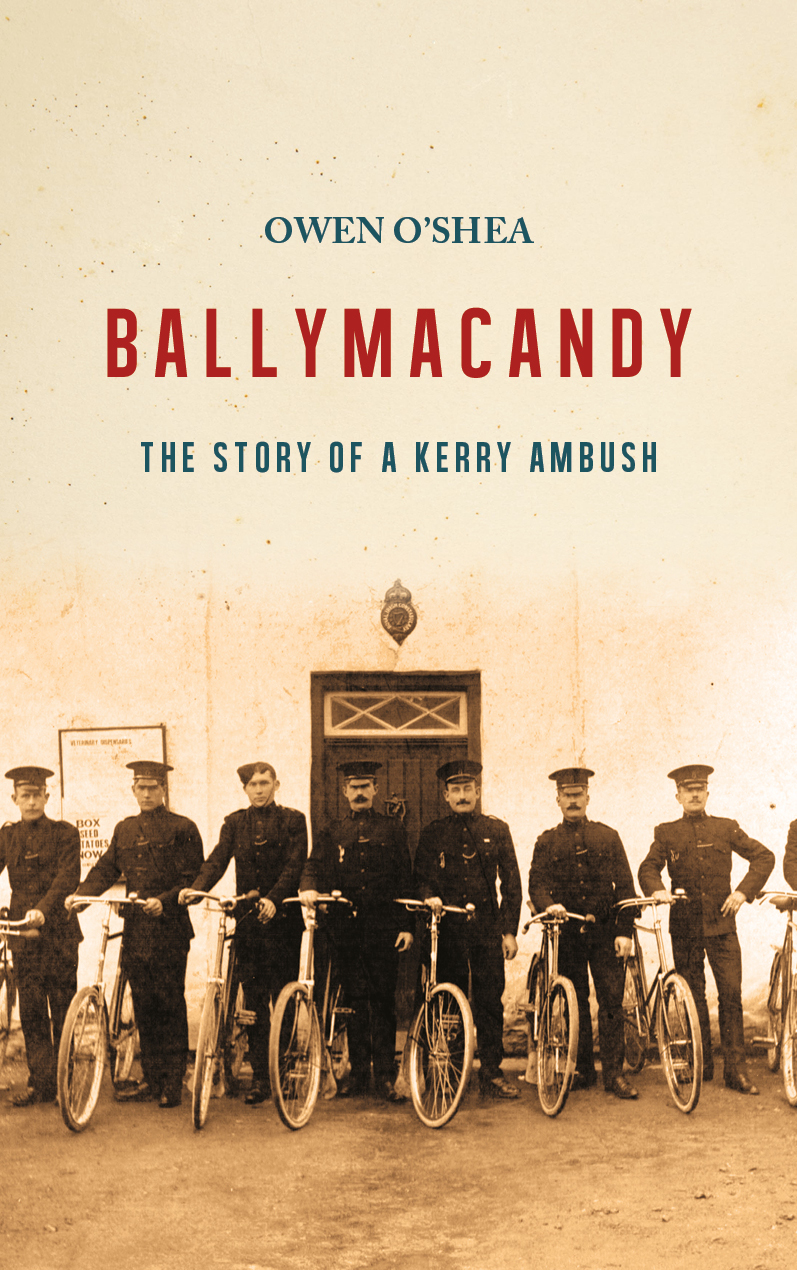 The last Black and Tan to die in Kerry during the War of Independence lay bleeding from a bullet wound to the neck for several hours in a cottage near Milltown before he succumbed to his injuries.

Constable John Stratton McCormack was mortally wounded in an IRA ambush at Ballymacandy between Milltown and Castlemaine on June 1, 1921 in an audacious attack involving dozens of IRA members from mid-Kerry, Castlegregory and Tralee.

A new book from Milltown historian and author, Owen O’Shea, follows many years of research into the events at Ballymacandy which occurred just six weeks before the end of the War of Independence and which claimed the lives of three RIC officers and two members of the notorious Black and Tans.

The ambush involved IRA, Fianna Éireann and Cumann na mBan units from Milltown, Keel, Callinafercy, Kiltallagh, and senior Kerry No. 1 Brigade members from Castlegregory and Tralee who had spent months in a hideout in Keel on the Dingle Peninsula.

Among the five killed was RIC sergeant James Collery, a father of nine children who lived at the Square in Milltown and who died at the hands of those who were his neighbours, as the War of Independence in mid-Kerry reached a bloody climax.

‘Ballymacandy: The Story of a Kerry Ambush’, published by Merrion Press, is the definitive account of one of the most important events in the Anglo-Irish War in Kerry and includes extracts from diaries, IRA pension applications, private correspondence and previously unpublished accounts from local IRA leaders like Dan Mulvihill, Jack Flynn and Tom O’Connor, who was officer commanding on the day. It describes the dramatic events in the lead-up to the ambush and how the local IRA were plotting a major assault on the Crown Forces for several months.

“This was a story I grew up with and I always wanted to know more about what happened at Ballymacandy, near my home place, on June 1, 1921. I have tried to tell this story from many perspectives, that of the IRA gunmen, the widow of the RIC constable, the hard-nosed District Inspector, the terrified civilians of my home village, the women of Cumann na mBan, the priest who prayed into the ears of the dying, the IRA’s informer within the police, and the schoolboys who watched as the remains were loaded onto carts,” Owen said.

“One of my most significant findings from the British Archives was an attempt by the military authorities to have the local doctor, Daniel Sheehan, struck off the medical register for allegedly failing to provide Constable McCormack with adequate care as he lay dying, and despite reassurances that medical aid was on the way. You get the sense that the Crown Forces were looking to blame anyone but themselves for their failing military strategy at this time.”

Ballymacandy offers an insight into the planning and execution of an IRA ambush, the critical and overlooked role of Cumann na mBan, the dangers faced by the policemen in Ireland at the time, the motivations of the men who lay in wait on the roadside, and the villagers who were, unusually and remarkably, saved the brutal reprisals which had become synonymous with the dreaded Black and Tans in 1921.

The IRA ambushers included prominent figures from the revolutionary period in Kerry including future TDs, Jack Flynn and Johnny ‘Machine Gun’ Connor, as well as Tadhg Brosnan from Castlegregory, Jerry and Billy Myles from Tralee, and Dan ‘Bally’ Keating, who died aged 105 in 2007, the oldest surviving veteran of the Anglo-Irish War.

“I am immensely grateful to the relatives of those involved in the ambush for sharing memories, correspondence and documents. Many of those who took part in these extraordinary and traumatic events rarely or never spoke about what happened but now, thanks to newly published archive material as the centenary of the ambush approaches, their stories can be told.

“I hope the book will contribute to a wider knowledge and understanding of these events during such a pivotal period in our collective history.”

The online launch of the book will take place tomorrow (Monday) at 8pm. Details can be found on www.owenoshea.ie.

Achievements recognised as school year draws to a close