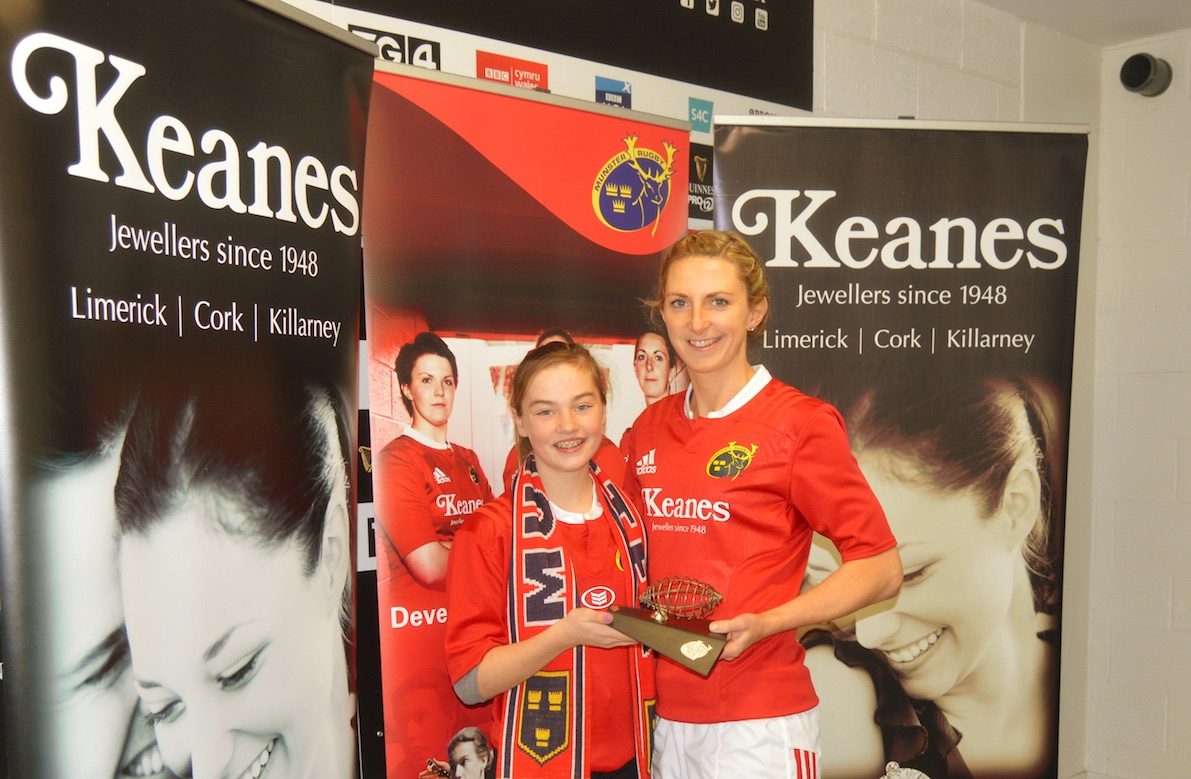 KERRY’S Siobhan Fleming, captain of the women’s Munster Rugby team, gave her take on life and the Women’s Interpros this week. The Currow native and her teammates Leah Lyons, Orlaith Buckley and Fiona Hayes called in to Keanes Jewellers in Cork to pick out a few pieces to give them extra sparkle this Christmas. With two wins already in the Interpros, there will be plenty to celebrate during the holidays.

It was a happy day on Saturday all round for Munster. Siobhan led her team to glory over Connacht at the Irish Independent Park, in the second of two wins, in the 2016 Interpros. This Saturday the Munster Ladies will take on Leinster at Donnybrook and are hoping for another win!

Siobhan also helped Keanes celebrate 50 years in Killarney earlier in the month, a milestone for the shop and the local community.

A special needs assistant by profession, Siobhan plays in the back row for the Munster Rugby team. “I started with Tralee RFC, November 2007,” said Siobhan.
As for the best career advice she ever received, Siobhan said: “Do the best you can do… and don’t worry about what the next person is at.”

The highlight of being a rugby player is “the team spirit, the passion and the pride that goes with rugby”, according to Siobhan. The Currow lady is a sporting all-rounder, having also played football, basketball, athletics, and badminton.

As for her best rugby memory? “I have been fortunate enough to have lots, from first caps to winning silverware with my club’s mates/friends, to getting to represent my country and be part of the magic that happened when we made history winning the grand slam in 2013, and of course being part of the team that beat New Zealand in the 2014 World Cup,” said Siobhan.

The rugby star added: “Any day I get the privilege to wear the red and white jersey of Munster is special, but getting to run out onto a home pitch last Saturday, along-side our mascot Erin Haly, surrounded by family and friends cheering us on was something extra special that I will hold very dear to my heart forever. The final whistle couldn't come fast enough for us in the end as Connacht had found another gear and were willing to punish us, if given half the chance. But the fight and bravery of my teammates was exceptional.

“Not allowing Connacht to prematurely dent our hopes of retaining the Inter provincial title for the third year running. I would like to sincerely thank Keane's Jewellers for their continued generous sponsorship and to our mascot Erin for leading the Munster Ladies onto the pitch with me. I hope it will be a unique and special a memory for Erin, as it was for me and that one day, if she should choose, she might get the opportunity to follow in the footsteps of all the Munster ladies that have gone before her to represent their magical province of Munster.”

So who’ll be rocking around the Christmas tree at Killarney’s welcome home disco?

Santa Claus receives a wish list fit for the Dail