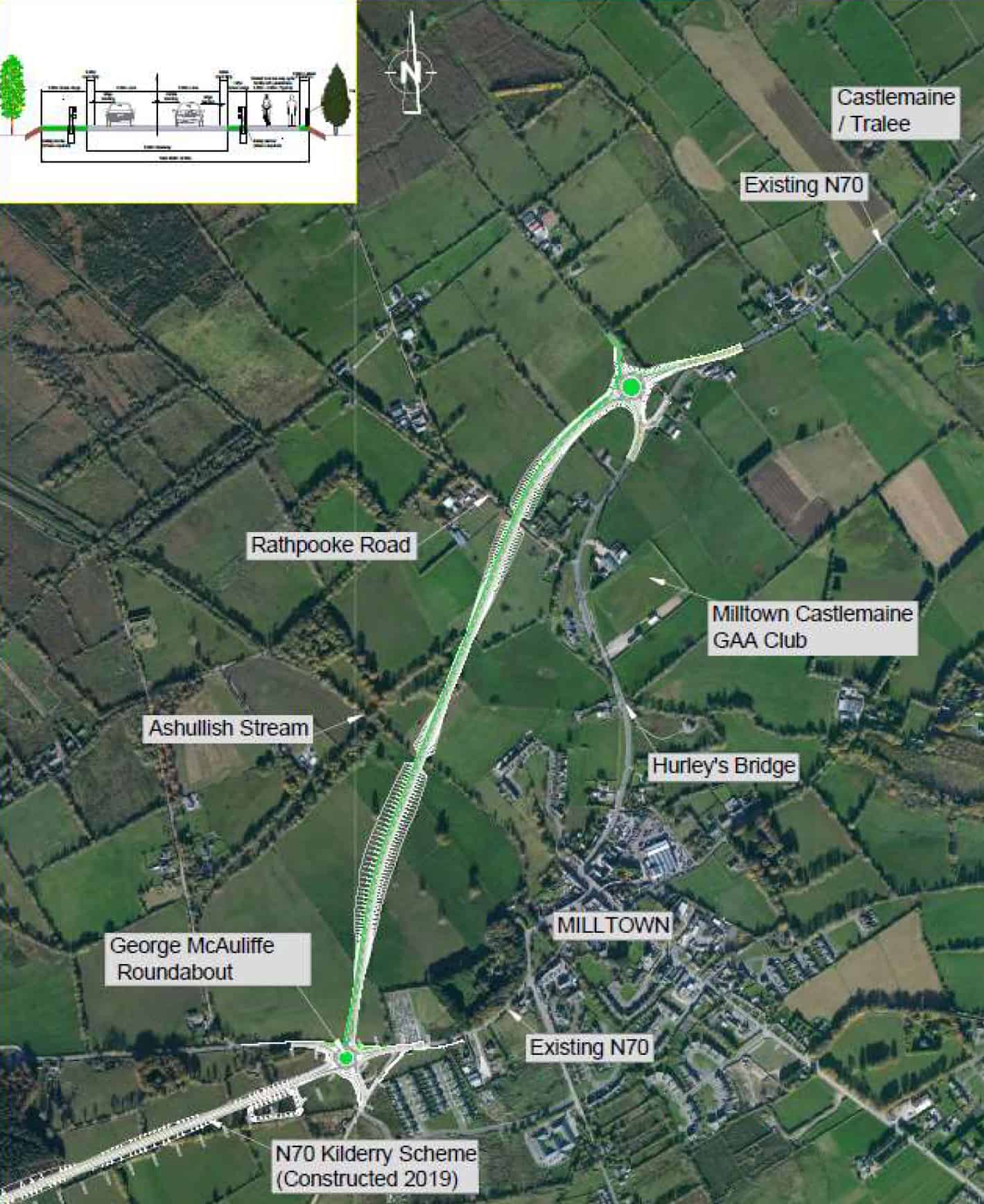 The new N70 Milltown Bypass will take over 60 percent of the daily through traffic away from the village. Kerry County Council says that over 5,300 vehicles, travelling between Killorglin and Castlemaine will use the new road when it is completed in just over two years’ time.

The Council unveiled the preferred route of the new bypass at a special virtual launch last Friday.

The new road will run from a newly constructed roundabout on the Castlemaine side of the village and will link with the existing George McAuliffe Roundabout that was built as part of the Kilderry Wood scheme in 2019.

The 1.6km stretch of single carriageway road and hard shoulder will be built on the western side of the village, said to be the fastest growing town in Kerry, and land acquisition will start later this year.

“[The new road] will generate time savings to through traffic and alleviate delays at peak hours in particular at the junction between the N70 and R563, Killarney Road, at Larkin’s Corner,” the online meeting was told.

“The upgrade of the N70 route is supported by objectives in successive County Development Plans, with the need for a bypass of Milltown being a specific objective of the Kerry County Development Plan since 2009, as well as Local Area Plans, and is consistent with national policies for the development of the region and the county. The proposed route will further strengthen the linkage between Tralee and Killorglin which are both within the Kerry Hub Knowledge Triangle.”

The works will also include the realignment of what is known locally as Heffernan’s Bend on the northern side of the village.

However, once the new road is completed traffic coming to and from the Killarney and Fossa side will still have to drive through the village.

"The road we never knew we needed”

So Milltown is set to get a bypass and while this is great news for anyone who travels between Killorglin and Tralee everyday, it isn’t exactly the most needed new road in the county.

Even the Milltown Chamber Alliance agrees with that and will be objecting to this project.

We are told that the new road will divert over 5,300 vehicles everyday away from the centre of the village. This is very valuable passing trade that the alliance does not want to lose.

However, 30 kilometres to the east, the Killarney bypass and Farranfore road scheme is still being spoken about. While there appears to be some progress plans for building Killarney’s relief road, plans are no where near as advanced as the Milltown project.

For the record, 18,000 vehicles a day use the current Killarney bypass.