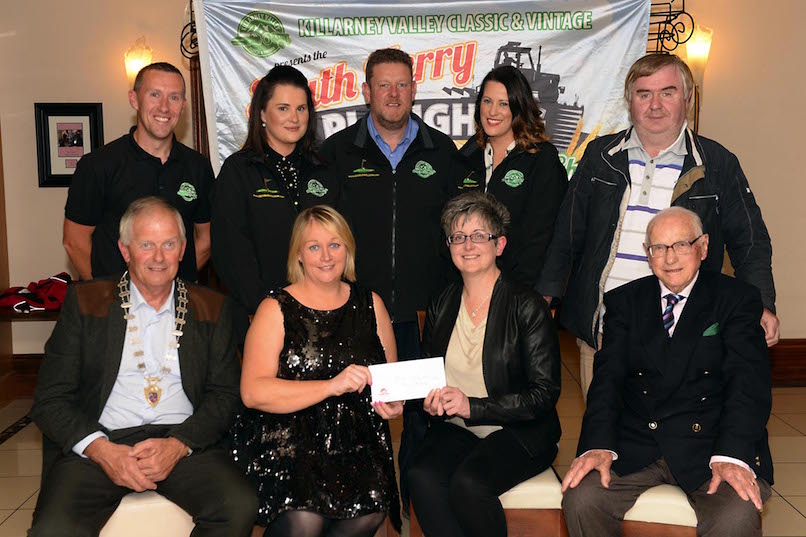 DESPITE the weather playing spoilsport on the day of the South Kerry Ploughing Championships and Harvest Show, the event organiser Killarney Valley Classic and Vintage Club still helped to generate an impressive €36,600 for local charities this year.

Supported by the hard work and fundraising efforts of the four charities involved, the torrential downpour on September 11 didn’t completely spoil the day and the gate receipts, fundraising initiatives and other events organised by the club and its supporters helped to boost the charity coffers.

The four organisations to benefit were the Kerry branch of the Irish Kidney Association, the Irish Pilgrimage Trust, Kerry Down Syndrome and Kerry-Cork Health Link Bus and they all worked so hard to ensure the funds generating potential was maximised.
In addition, €500 donations have been made to support both the autism unit at Fossa National School and St Ita’s and St Joseph’s School in Tralee.

Other club events that helped raise funds for the charities involved were a vintage car show in July and a tractor and vintage car run in April.

The committee, sponsors and friends of the Killarney Valley Classic and Vintage Club gathered at the Travel Inn in Fossa for the presentation of ploughing prizes and the handing over of cheques to representatives of the four chosen charities.

As a number of the planned events had to be cancelled on the day, when the heavens opened, the committee still had an abundance of terrific prizes to be given away and, as a result, many of those in attendance on the presentation night went home very happy.

Event chairman Tom Leslie has thanked everybody that attended and supported the ploughing and show on September 11. “We would like to pay tribute to those who sponsored stands, prizes, exhibitors and competitors and, particularly, all the volunteers who helped out on the day and in the weeks leading up to the event,” he said.