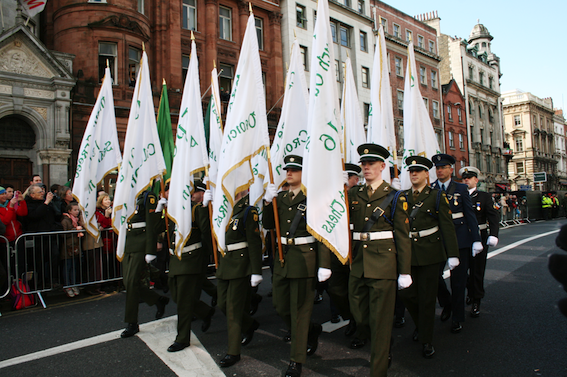 Members of the Defence Forces Parading through the streets of Dublin during the commemoration of the centenary of the 1916 Rising. PICTURE: PHILIP JONES/MKC

THE past weekend has seen national commemorations of the 1916 Rising unfold in compelling and creative fashion and now, following the conclusion of the 1916 Commemorations in Dublin and elsewhere over the Easter Weekend, focus is turning to a series of planned commemorative events in Kerry. Our county was central to plans for the Rising and the scene of numerous pivotal events during the insurrection of 100 years ago.

Kerry County Council’s Commemorations Office has unveiled plans for several commemorations, particularly at Valentia Island, from where the telegram was sent to US to alert Clan na Gael to the outbreak of the Rising; at Ballykissane near Killorglin, where three Volunteers drowned on their way to seize wireless radio equipment; and at Banna Strand, where Roger Casement, Robert Monteith and Daniel Bailey came ashore on Good Friday 1916.

“Kerry was central to the preparations for the Rising with Tralee man Austin Stack charged with organising the landing of arms at Fenit at Easter 1916. Key figures like the O’Rahilly (Ballylongford), Fionán Lynch (Waterville), An Seabhac (Dingle), Thomas Ashe (Lispole), and Piaras Béaslaí were key figures in these historic events,” said Kate Kennelly, Kerry 2016 Co-ordinator.

“There were also key incidents like the drowning of Con Keating, Dan Sheehan and Charlie Monahan at Ballykissane Pier on Good Friday and the failed attempt to land the arms shipment from Germany which contributed to Eoin MacNeill’s decision to issue the countermanding order on Easter Saturday.

“The iconic arrival of Casement at Banna in the early hours of Good Friday and his subsequent arrest are also pivotal events and that is why a complete State Commemoration, attended by President Michael D Higgins will take place on April 21 at Banna Strand, the exact centenary of events,” said Kate Kennelly.

President Higgins will also officially open ‘Casement in Kerry: A Revolutionary Journey’ at the Kerry Museum in Tralee on April 21 at 4pm. The exhibition will take visitors on a series of revolutionary journeys: Roger Casement’s path from servant of the Crown to Irish nationalist that led to the gallows in Pentonville Prison; the road to independence for Ireland with the first stepping stone of the Easter Rising; and the experience of the Kerry people whose lives were transformed by the events of 1916.

The commemorations at Valentia, Ballykissane and Banna are all part of an extensive programme of events which run throughout the year in Kerry and which have already seen Kerry communities embrace the centenary and organise their own events. Among those are events to honour the four Kerry men who died in Dublin – The O’Rahilly (Ballylongford), Patrick Shortis (Ballybunion), Patrick O’Connor (Rathmore), and Michael Mulvihill (Ballyduff).

On Saturday, April 30, there will be the unveiling of plaque to Thomas Ashe, who led Volunteers at the so-called Battle of Ashbourne in County Meath and was the last commander to surrender. Also that day, there will be also be a series of events in Ballylongford to honour local man, The O’Rahilly, who was a key figure in the foundation of the Volunteers and who died on Moore Street on April 29, 1916.

Members of the Defence Forces parading through the streets of Dublin during the commemoration of the centenary of the 1916 Rising. PICTURE: PHILIP JONES/MKC

Help reel in support for charity