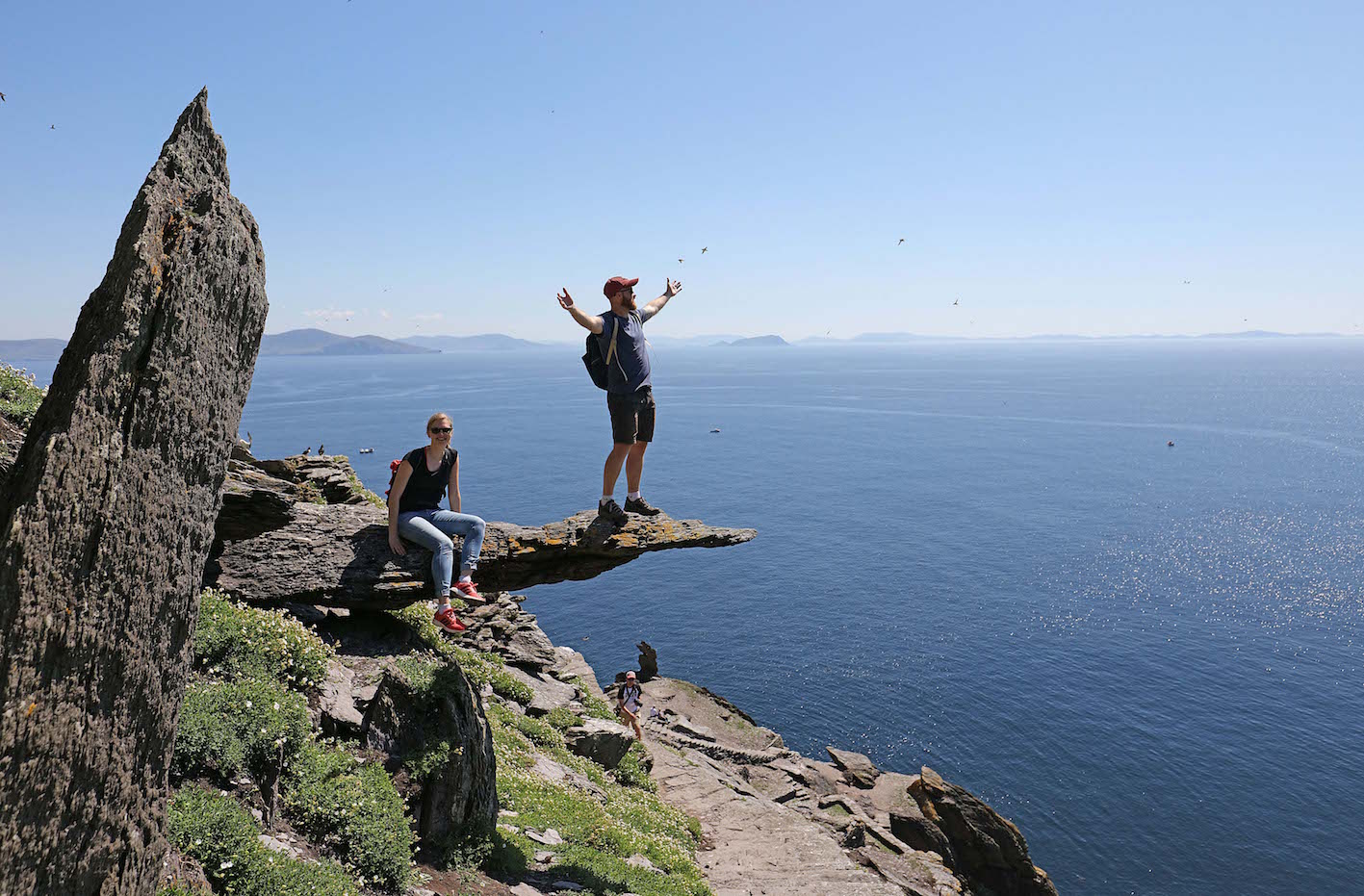 Pictured are journalists Ben Groundwater, Australia, and Riana Andrews enjoying their visit on Skellig Michael on their visit organised by Fáilte Ireland in conjunction with Tourism Ireland. PICTURE: VALERIE O'SULLIVAN

LAST year was a bumper one for international media visiting Kerry and Ireland. Over 1,000 representatives from print, broadcast and online channels across the world descended on our shores during the year providing Irish tourism with an overall reach to over one billion readers and viewers worldwide.

The advertising value of this reach is estimated at over €87 million. Fáilte Ireland, together with Tourism Ireland, co-ordinated over 400 different itineraries resulting in the media representatives meeting with over 4,000 Irish businesses across the country.

Ciara Sugrue, head of international publicity with Fáilte Ireland, today stressed the importance for tourism of hosting international media: “Bringing international media to Ireland and showing them what is on offer plays an integral role in ensuring that we get our message out there - Ireland is a must-see place to visit. Whether it is high profile trips for the likes of the St Patrick’s Festival or tailored tours of the Wild Atlantic Way and Ireland’s Ancient East, this work generates the type of reach and publicity that any competitive destination needs to sustain growth.”

The Wild Atlantic Way, Ireland’s Ancient East and Dublin were heavily profiled, as well as particular emphases on both business and food tourism. One of the key highlights of the year included a group of high profile international journalists who landed in Skellig Michael to follow in Luke Skywalker’s footsteps and see for themselves how the force was awakened.

Another highlight involved a group of European media (with a circulation of almost six million) who visited Lisdoonvarna for the Outing Festival and to document the Irish LGBT tourism experience.

Looking ahead to 2017, Fáilte Ireland will once again be working closely with Tourism Ireland to attract influential and engaging media. Ms Sugrue added: “Already, we have drawn up plans to target more media influencers during 2017. For next year, we are developing itineraries focussed on attracting those media representatives who will best put Ireland firmly on the map for millions of international travellers.”

In addition to media trips, Fáilte Ireland also works with international buyers and travel agents to showcase what Ireland has to offer. During 2016, over 1200 such buyers enjoyed familiarisation trips, workshops and networking events – all designed to increase awareness and interest in Ireland.

Above: Pictured above are journalists Ben Groundwater, Australia, and Riana Andrews enjoying their visit on Skellig Michael on their visit organised by Fáilte Ireland in conjunction with Tourism Ireland. PICTURE: VALERIE O'SULLIVAN

‘Direct train route between Dublin and Tralee must be maintained’