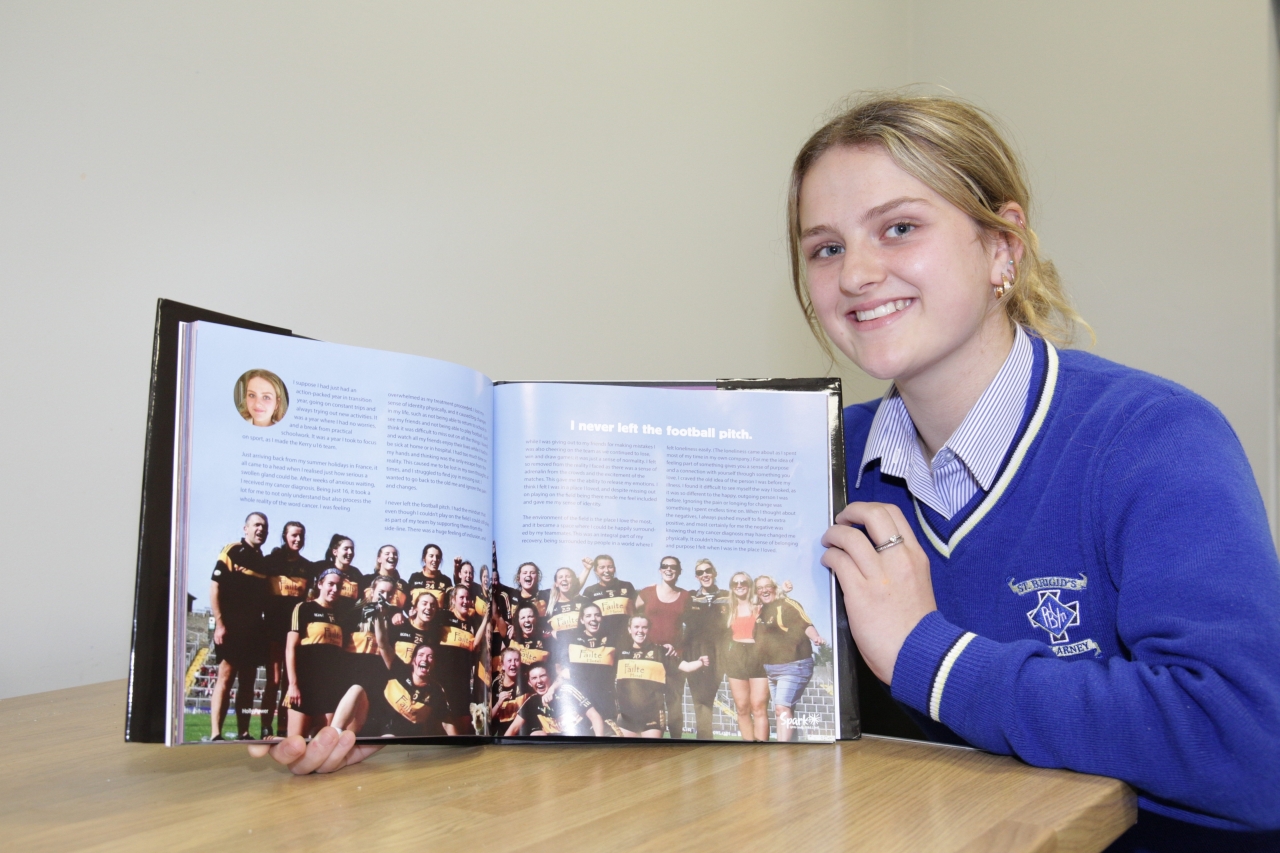 INSPIRING: Killarney teen Holly Power has shared her story of Stage 4 cancer in a new book 'Spark - Stories to ignite body mind and soul' in aid of Comfort for Chemo'. Photo: Michelle Crean

"You can overcome anything"

One inspiring teen's story of how she bravely overcame the shocking diagnosis of Stage 4 cancer is part of a new book which is set to help others.

18-year-old Holly Power, daughter of Vivian and Tony from Lewis Road, was left devastated to learn that her cancer was Stage 4 and advanced to her lungs, but is now bravely sharing her story to help raise funds for a cancer charity.

During the summer, local woman Bríd O'Connor wanted to create a book of stories about locals who overcame the odds and asked Holly to share her cancer journey. 'Spark - Stories to ignite body, mind and soul' is now ready to purchase and Holly is hoping her story will not only inspire others but help raise vital funds for Kerry cancer service 'Comfort for Chemo'.

"I was a bit hesitant to share my story at first," Holly, who is now making a good recovery, told the Killarney Advertiser this week.

"However, when I thought about it and how it might help others I decided to do it. It's for Comfort for Chemo which is why I did it."

Holly, who is this week back playing for her beloved Dr Crokes, was just 16-years-old when she was first diagnosed.

After months of feeling run down and tired all the time, she eventually learned that she had cancer.

"I had been sick on and off since January that year [2018] but the weather was bad and I thought I was run down. I had swollen glands a lot and I was getting Vitamin B injections. Towards the end of May I had swollen glands under my arm. All my blood tests were coming back clear which is why no-one suspected."

Doctors then sent her to the Bons in Cork where she was eventually diagnosed with Stage 2 Hodgkin's Lymphoma.

"We were to go to Cork on Friday but got called to come on Thursday instead."

She explained how she was oblivious to the seriousness of the diagnosis at first and tried as best she could to stay positive.

"Being diagnosed was hard at first. They had to check all the [lymph] nodes and I had a biopsy. The consultant then sent them off and they both came back clear, and he said the lymphoma was hard to diagnose. I had to wait two weeks to hear and they said I had a 50/50 chance that I'd have it."

And while trying to gets to grips with the shocking news, worse was to come.

Just two weeks after starting chemo Holly and her parents were doubly shocked to be told that her cancer was in fact Stage 4 and had advanced into her lungs.

"It was bad enough just to be diagnosed but that was a double blow."

Life was hard for the teen as not only did she have to give up playing football but she also couldn't go anywhere due to a low immune system and risk of infection. She also missed out on Fifth Year in St Brigid's which she had to repeat the following year.

"I wasn't able to go to places, I had to stay at home a lot because of my immune system. Friends called and had to sanitise, that was before lockdown, but my family and friends kept me going. I was trying to have the best outlook. The word cancer is so scary, you think the worst case scenario."

Just under a year from the initial diagnosis Holly and her family were relieved to hear good news.

In May 2019 she was told that the cancer was reducing enough that she could go on with normal life.

"That was such a relief."

She said it proves that you can overcome anything.

She's now encouraging people to buy the book which is available in Eason and Blackthorn Gift Shop Killarney for €25 with money to help others undergoing chemotherapy.

"There's definitely a message in the stories. It's all for a good cause. By buying the book you're helping someone."