HEARTFELT: Diane Twohig has publicly thanked the people of Killarney following the tragic passing of her husband Paudie (pictured).

Almost one month after his passing, the wife of the late Garda Paudie Twohig has issued a heartfelt thank you to the people of Killarney and beyond for their "emotional and practical support". 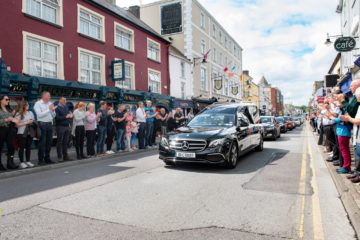 Diane Collins Twohig, also a local serving Garda, said that both herself and her family "will be forever grateful" for the send-off given to Paudie (44), as well as the support offered from their colleagues in Killarney Garda Station, where Paudie was a popular staff member.

He was diagnosed with a stage four melanoma in April and sadly succumbed to the illness on Sunday, August 1 at Cork University Hospital (CUH).

“We offer our heartfelt thanks to the many friends, neighbours and well-wishers who gave us emotional and practical support during Paudie’s short, but hard fought illness,” Diane said. “To the people of Killarney town our family will be forever grateful for the send-off you gave Paudie. Killarney was very close to his heart and his drive through town one last time was so special. The expressions of love and support and the continued shared memories has made our loss more bearable.”

She also thanked her colleagues at Killarney Garda Station and the medical staff at Cork University Hospital.

“A special word of thanks to our colleagues in An Garda Síochána who supported our family over the last number of months and their exceptional professionalism on Paudie’s final journey. To Dr Derek Power, the staff in CUH, CUMH and MUHH we wish to express our deepest gratitude for the excellent care, support, kindness and respect shown at all times. Fr Kieran O’Brien, thank you, your personal service was a comfort and source of strength to our family. Also thank you to Monsignor O’Donnell, Canon Roberts, Fr Manning, Fr O’Mahony, Fr Cormac, and Fr Keane.

“Thank you to Fitzgerald Funeral Directors Macroom for their guidance and organisation. To John O’Sullivan Event Videography, a kind friend and neighbour who streamed Paudie’s funeral. You went above and beyond for us.

“To Cathal Flaherty your incredible voice and lyrics were so poignant, Paudie was your biggest fan, thank you for performing for him one last time. Also, a kind word to Sarah Twomey, Aghinagh GAA, Killarney No Name Club and to all who donated to The Garda Benevolent Fund and Neo Natal CUMH.

“As it is impossible to thank everyone, please accept this acknowledgement as an expression of our deepest gratitude. The Holy Sacrifice of the Mass will be offered for your intentions.”

Paudie's Months Mind will be celebrated on September 1 at 8pm in St John The Baptist Church Ballinagree and will be streamed on www.munsterfunerallivestream.ie/paudie-twohig.

Fly the flag and support the Kerry team