Friends of one Killorglin family devastated to learn their child has a rare and possibly non-curable disease are planning a big fundraiser to get the little girl to America.

One-year-old Marley May was diagnosed with Leigh’s Disease, a rare mitochondrial illness, in November and faces a life expectancy of just three years.

Feral Ashworth, who has been a close family friend for 20 years, has set up ‘The Mitten fund’ and a GoFundMe page: ‘help marley may’ with a target of €50,000. 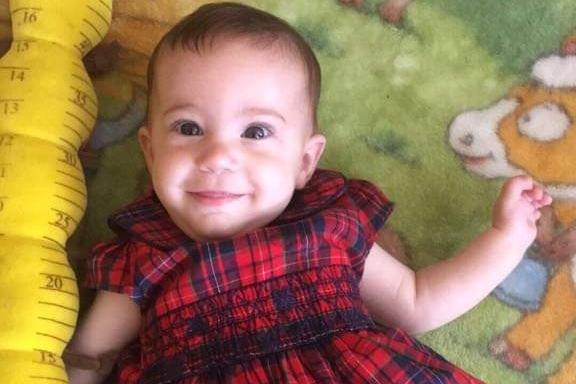 RARE CONDITION: Little one-year-old Marley May from Killorglin who has been diagnosed with a rare condition called Leigh's Disease.[/caption]

Following a tractor fundraiser last weekend, Feral with the help of friends and family has organised a shave and wax event in The Fishery, Killorglin, tomorrow (Saturday) at 1pm.

There, Feral and her sister Fern will shave their hair off, while Mark Davy and David Roche will have a leg wax and head shave. Donations will be accepted on the day and there’s also lots of raffle prizes up for grabs.

Marley May, who has two older brothers, was born a happy healthy little girl and continued to be that way until things changed dramatically overnight, Feral explained to the Killarney Advertiser.

“In November, Marley May’s parents received the devastating news that she is suffering from a rare mitochondrial disease which has no known cure,” she said.

She added that there’s only been one other case in Ireland, a little boy aged two, who sadly passed away.

“It’s a very rare condition which a lot of people don’t know about. We’re trying to raise funds as the trial tests are in America."

Treatments generally involve variations of vitamin and supplement therapies, often in a “cocktail” combination, and are only partially effective - if at all.

The only hope the family has is a trial drug called EPI-743  EPI-743 that is based on vitamin E. Treatment is a gruelling 13 months and is only being trialled in America.

She added that it’s going to be a long road to try to get a trial here in Ireland, if at all, to prolong Marley May’s life expectancy.

“I’m very close to the family, they have watched me grow up,” Feral said.

“I want to do anything I possibly can to watch their kids grow up together. My hair will grow back, there’s no guarantee they’ll have the time with Marley May.”

Sadness at death of ‘Fr Tidy’

By Sean Moriarty The question of pedestrianisation in the town centre has divided Killarney for years but a survey by the Killarney Advertiser this week shows the town slightly more in favour of it. A total of 37.14 percent of respondents want the pedestrianisation of Plunkett St to remain as it is – closed to […]

The question of pedestrianisation in the town centre has divided Killarney for years but a survey by the Killarney Advertiser this week shows the town slightly more in favour of it.

A total of 37.14 percent of respondents want the pedestrianisation of Plunkett St to remain as it is – closed to traffic on a permanent basis while 24.76 want it to go back to its pre-pandemic arrangement where the street was only closed to vehicular traffic between 7pm and 7am each night.

An additional 34.29 percent want to see an increase in pedestrianisation in town centre by extending the Main St arrangement that was in place during the summer. In that period the town’s main thoroughfare was closed to traffic, day and night, during the weekend.

Only 20 percent of the respondents want to abolish pedestrianisation altogether, but that is still a significant number ensuring that this debate will linger on for a long time yet.

By Michelle Crean A local group hosting a life-saving information day tomorrow (Saturday) are to receive huge exposure on national TV after a crew came down to interview them about their campaign. Members of Killarney Cardiac Response Unit (KCRU) – who are planning a ‘Restart a Heart Day’ to raise awareness about life-saving techniques – […]

A local group hosting a life-saving information day tomorrow (Saturday) are to receive huge exposure on national TV after a crew came down to interview them about their campaign.

It’s hoped their campaign will be broadcast tonight (Friday) or tomorrow (Saturday).

The KCRU event takes place tomorrow in ANAM Arts and Cultural Centre between 10.30am and 4pm as part of the European Restart a Heart Day. It’ll include CPR demos, public information, an art display, a video launch w️ith many prizes to be won.

“European Restart a Heart Day was founded with the support of the European parliament and takes place on October 16 every year. We’re spreading the message that 20 minutes of your time could make all the difference saving a life.”

In 2021, the focus of the event is on survivors with the hashtag #CPRSavedMyLife.

“With this campaign we want to create awareness that everyone can learn CPR and facilitate BLS courses in schools and public locations.”

He said they hope that Kerry TDs Danny Healy-Rae, Brendan Griffin and Minister for Education Norma Foley will be in attendance throughout the day, and the public are invited to attend.

“Find out how simple actions can save lives. Prizes include a three day First Aid course valued at €300, two First Aid kits, and a voucher for a local business.”

By Sean Moriarty The question of pedestrianisation in the town centre has divided Killarney for years but a survey by...

By Michelle Crean A local group hosting a life-saving information day tomorrow (Saturday) are to receive huge exposure on national...

By Sean Moriarty The volunteers behind Killarney Mountain Meitheal will be featured in a short documentary to be screened during...

Film fans will have plenty of variety this weekend

By Michelle Crean It was yet another very special birthday for Ireland’s oldest man as Michael J O’Connor celebrated turning...

by Adam Moynihan After a frustrating year-and-a-half of inactivity due to COVID-19, Killarney’s two Men’s National League teams will finally...