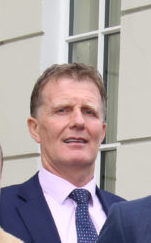 Friday was a final farewell to principal of Fossa National School after nine years inspiring both pupils and staff.
Pat Clifford, who believes in being kind and compassionate to bring out the best in pupils, saw many changes during his time including €1.9m of works at the school which saw construction of new classrooms and an astro turf from Department of Education grants through the hard work of the school's Board of Management, Parents Association, and staff.

Although last Sunday was his official retirement date after the mid-term break - Pat called to the school again today (Friday) where staff and pupils got a chance to wish him all the best for his new future.

He told the Killarney Advertiser that he was passionate about seeing pupils reach the best of their abilities with encouragement by a kind word every now and again.

"I really enjoyed my time there," Pat told the Killarney Advertiser. "I always pencilled in that I'd retire in my mid-50s. I believe that you do as well as you can for as long as you can. On Monday, the school's new principal John Burke began his first day I wish him all the best. Also, the Board of Management have been
very helpful and I deeply appreciate their help over the years."

Pat began his teaching career in 1984 after graduating from St Pat's College in Dublin, beginning first in Rush, Co Dublin until he moved to Macroom in 1998 taking up the position as deputy principal until 2002. Then it was onto Spa National School just outside Tralee where he first took up a principal's role before moving to Annascaul National School again as principal. Then it was back home to Fossa where he worked as Principal for the last nine years.

And with retirement comes more time on his hands, but Pat says that he'll get involved with more work related to education.

"I have a few things in the pipeline, I'll do work with different educational institutions. At the moment it's time for sharpening the saw and reflecting."

And on his time as an educator he added that he hopes those he taught and their parents will remember him for his compassionate nature.

"Teachers and principals have an enormous capacity to have a profound effect on children, every interaction you have with a child makes a difference. The legacy I'd like to leave is that the children thought I was kind and caring."

Killarney clubs lose out as €74k handed out

Traffic issues to be included in Madam’s Hill project