NEW FACILITY: Irish-international fintech company, Fexco's new building in Killorglin, which will house its own Research Development and Innovation Centre, and RDI Hub - a world-class centre for digital innovation focused on commercialisation of innovation and research backed by Fexco, IT Tralee and Kerry County Council. Photo: Valerie O'Sullivan

125 Fexco staff are to be based in the centre and RDI Hub and there’s plans to create 305 direct jobs by 2024. The state-of-the-art 57,000 sq ft replaces the manufacturing plant closed in 2012 – and, it’s dedicated to renowned Stanford University computer scientist John McCarthy, one of the founders of the discipline of artificial intelligence.

The facility was opened by Minister of State for Transport and Sport Brendan Griffin, and the CEO of Enterprise Ireland Julie Sinnamon. The project is backed by Fexco, IT Tralee and Kerry County Council.

The west wing of the building was donated by Fexco to become the home of RDI Hub, and house 136 people on its programmes and in its co-location space. 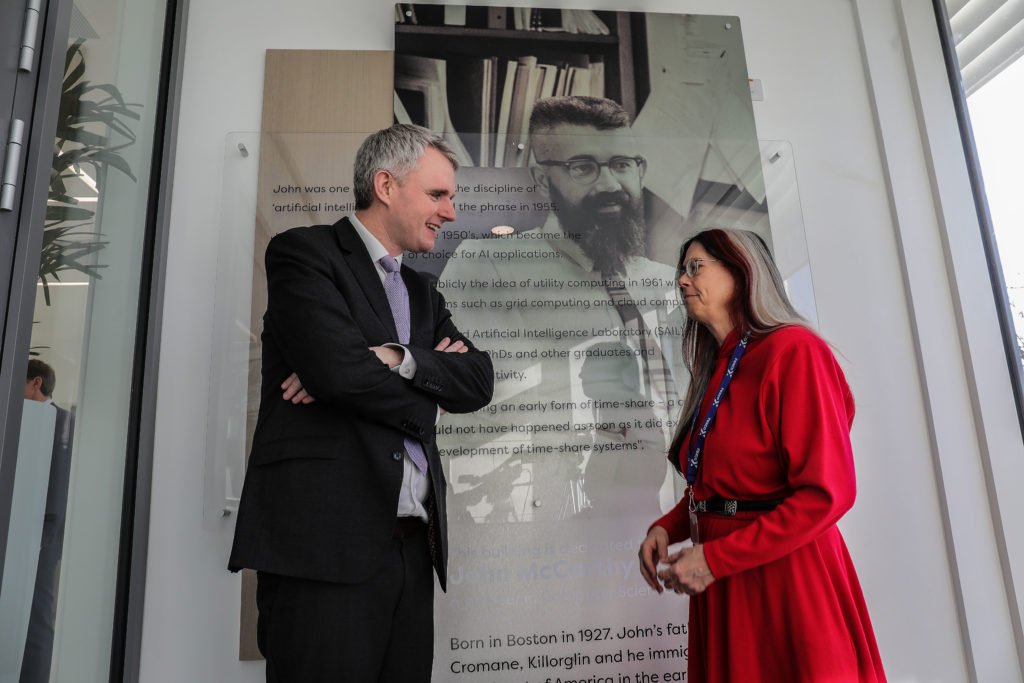 DEDICATED: CEO Fexco, Denis McCarthy, and Susan McCarthy, daughter of John McCarthy, for whom the building is dedicated, at the official opening of their new innovation in Killorglin which was opened Wednesday. Photo: Valerie O'Sullivan[/caption]

RDI Hub was established last year as a not-for-profit public-private partnership facilitating innovation and start-ups in the fintech and artificial intelligence (AI) sectors and in this initial period plans to support the establishment of over 35 high-tech funded start-ups.

Its colocation with Fexco’s Research Development and Innovation Centre will add value for both parties through increased availability of specialised labour and knowledge spill overs. RDI Hub will provide training to over 1,300 participants and support 140 apprentices on its programmes in its first five years.

John McCarthy’s father was born in Cromane, near Killorglin. His two daughters, Susan and Sarah, and his son Timothy were at Wednesday’s opening of the building to unveil a memorial plaque to their father.

The site on which the new building has been developed used to be the home of a manufacturing facility latterly owned by US firm Simpson Manufacturing, which closed in 2012 with the loss of 30 jobs. The Government has supported its transformation into a location that will support innovation, growth and entrepreneurship in the Southwest with €3.6m in funding for RDI Hub from Enterprise Ireland.

“This new building signals our commitment to providing world-class innovative fintech solutions to a global audience as well as supporting our local community, through job creation and local investment,” Denis McCarthy, CEO of Fexco said.

“Since our foundation in Killorglin in 1981 we have been able to grow our business to employ over 2,500 people in 29 countries, whilst keeping our headquarters and the driving force of the business at home here in Kerry.”

NCTs to resume in Killarney – but taxis still in limbo