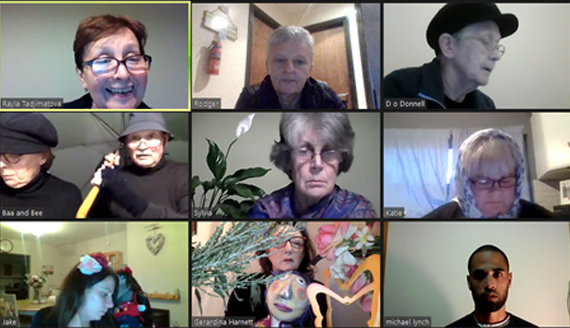 One local drama group undeterred by the COVID restrictions has turned the tradition of appearing on stage on its head - and will instead come to directly to the audience!

It will be a case of experimental theatre for Killarney Drama Circle who plan to raise the virtual curtain on its latest production, 'The Secret Garden in Baa-lorglin', to be performed this week.

And the venue? Your living room - or the supermarket car park - or any other place that you happen to find comfortable on Tuesday, November 3 and Wednesday 4 at 7.30pm.

The play, written by Uzbekistan-born director and producer Rayla Tadjimatova, takes the form of puppet theatre and is the second episode (the first being staged in 2019) in the lives of Rodger, an alien, and the friends he made in Baa-lorglin on his first visit to earth in search of company. Rodger has returned to Baa-lorglin only to find his friends, Bee and Baa, Katie Daly, Alice the Dreamer, Jazzy and Daniel O’Donnell distraught. What has happened to the earth during his short absence! It seems that only Lucy Lu, who helped Rodger on his first visit to the earth, can save them all.

Rehearsals for the 10-strong group have been taking place twice a week since September and, in the challenging times faced by all, many hours have been ploughed into performing in an unusual environment – via video link. The process is limiting in terms of theatrical space and only a director can properly acknowledge the frustrations of being unable to coach with the physical. Nonetheless, it is a product of the moment, and theatre is nothing if not experimental.

"There has been a lot of laughter along the way and technology has provided much of it," Janet Murphy from Killarney Drama Circle said.

"Like everything in life, there are pros and cons to online theatre, and a big pro is being able to enjoy the experience on cold, dark evenings with your slippers on and a cup of tea or, perhaps, a small glass of wine, within your grasp."

Performances, supported by Kerry Arts Council, are by invitation only.