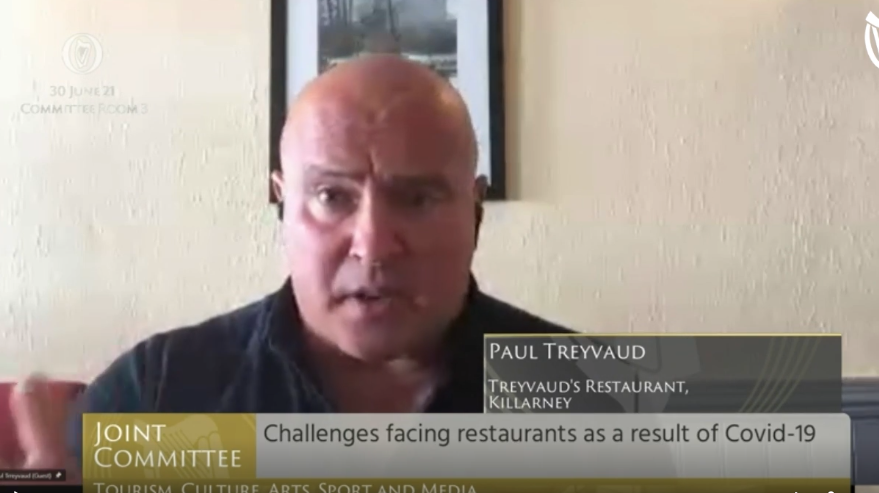 Killarney restaurateur Paul Treyvaud has warned that the hospitality sector “is in serious trouble”, and to expect “carnage” as restaurants and bars will be forced to close for good this winter.

The well-known chef, who operates a restaurant that bears his name on High St, was invited to address the Government’s Joint Committee on Tourism, Culture, Arts, Sport and Media following the announcement that indoor dining is set to be postponed until at least July 19.

Mr Treyvaud called on the elected politicians to reverse this week’s announcement and asked that they take his concerns back to their respective parties and Government leaders.

“The biggest issue yet to arise will be the absolute carnage that will follow this winter when so many restaurants will simply go bust as soon as the subsidies stop. They will fall off the cliff, and unfortunately a lot have and already closed their doors. Some have fallen but just haven’t realised it yet,” he told the committee. “Our industry is in serious trouble. We are going to see bars and restaurants closing.”

Treyvaud also warned that the proposed vaccine passport plan is unworkable and that he and his staff cannot police it.

“This is impossible to implement. How can I stand at my door and ask who is vaccinated? I might as well be asking someone what colour underpants they are wearing,” he said.

In May this year he launched a national campaign, called #ThePlan.

“All we wanted was to have the same level playing field as hotels were given and be allowed to open on June 2,” he said.

He was critical of the Government’s relationship with NPHET.

“We should not ignore NPHET’s advice but it seems to order [the Government],” he added, “NPHET advises and then the Government decides – [not ordered].”

The meeting was attended by several politicians including Kerry TD Brendan Griffin.

While he disagreed with Treyvaud’s concerns on the vaccine passport he did agree with other points raised.

“Other countries are using it [vaccine passport] and it has worked well,” Deputy Griffin said. “What is the logic in dining [indoors] in a hotel and not being able to dine [indoors] in the restaurant next door.”

New road “could divide the community”