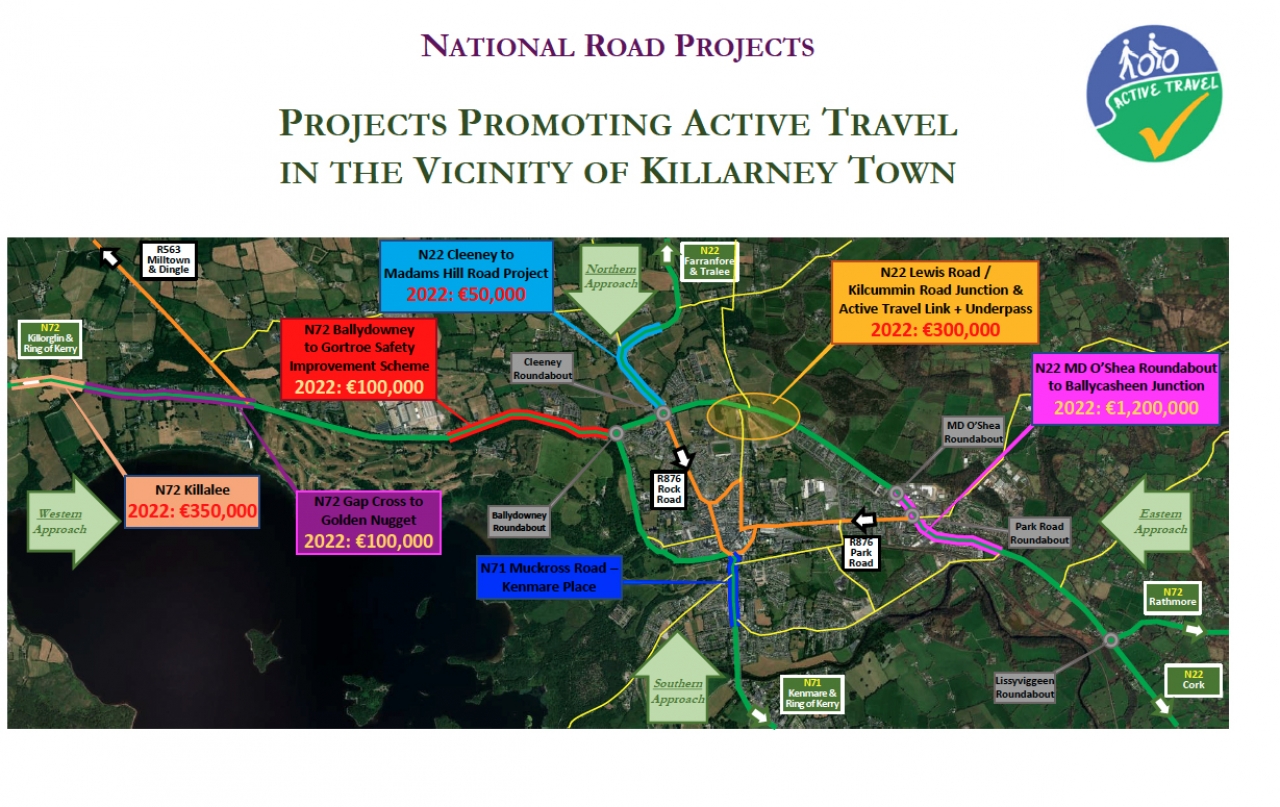 There are changes in the pipeline for Killarney roads in the coming months councillors at a Special Meeting of Killarney Municipal District were told this week.

Those in attendance were updated on works for big projects such as Killarney Bypass and Lewis Road/Kilcummin Junction and proposed Active Travel Link and underpass, the Farranfore to Killarney Road Improvement Scheme, Madam's Hill, MD O'Shea Roundabout to Ballycasheen Junction and the Glenflesk Traffic Calming Scheme amongst others.

Senior Engineer Paul Curry made a presentation on the Farranfore to Killarney Road Improvement Scheme saying that the Phase 2 Options Selection is underway with a number of route corridors currently being considered and appraised with the "emerging preferred route corridor to be selected in Q3 2022".
He said that the Farranfore to Killarney route was "a major scheme", that a public consultation took place last year where a "number of options went on display". These, he said, are currently being appraised and a report is being prepared. The report will be reviewed in the next four weeks or so. The emerging preferred route corridor will go on display for a period of four weeks in August or September to seek feedback from the public. After this a report on the findings will be published in October/November.

Plans for the proposed underpass on the Killarney Bypass within the ground of St Finan's Hospital, will be published by end of July.

The much awaited left-turn only from the Lewis Road junction and N22 Bypass Road will begin construction in August.

When completed traffic leaving Lewis Road will no longer be allowed to cross the Bypass Road. Instead motorists will have to turn left and make a U-turn at the Cleeney Roundabout.

Traffic exiting the Kilcummin Road will also be left turn only with motorists having to make their way to the Michael D O’Shea Roundabout at the sports centre before doing a U-turn.

As part of the Active Travel plans traffic lights are to be installed at the Aghadoe Junction which he said are "more friendly for pedestrians and cyclists". There will also be enhanced pedestrian footpaths on both sides coming down to the Cleeney roundabout.

In the Ballydowney to Gortroe Safety Improvement Scheme he said that the TII are awaiting results from a deer safety trial measure in Laois and if this is successful similar measures could be implemented in Killarney as an interim solution. Plans are to reduce vegetation in the first five to 10 metres which "won't draw the deer to the road". He added that further discussions are needed however with the National Parks and Wildlife Service.

Transport Infrastructure Ireland (TII) said they will install bigger speed signs in Glenflesk Village to "see if it makes a difference".

"We are going to change the speed indicator signs and make them bigger to see if it makes much of a difference," he said. "We have been recording speed in Glenflesk for the best part of the last 12 months.

"In the meantime we're going to make the speed indicator signs the next size up."

Wildflowers are not always simple to grow