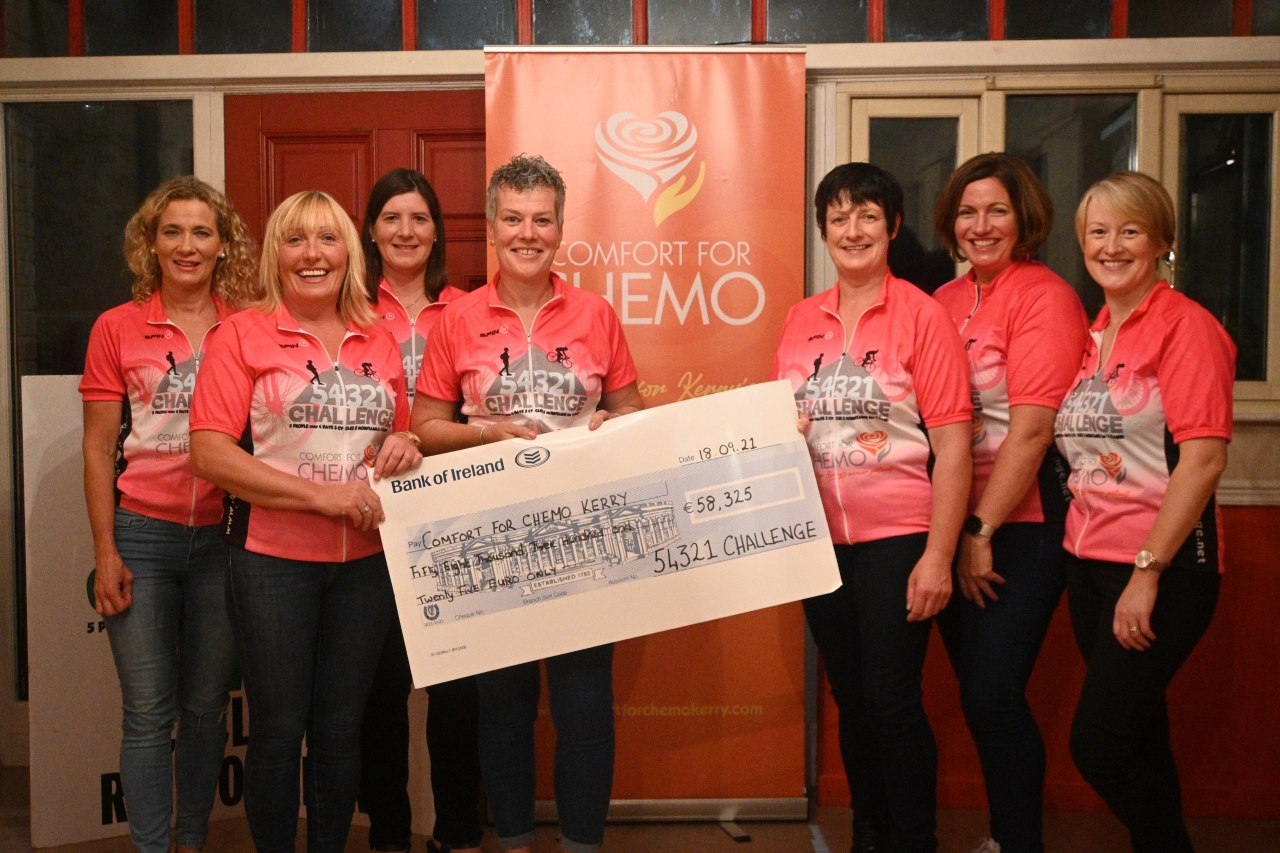 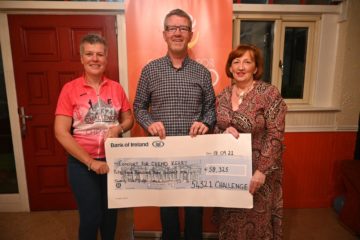 CHEQUE: Mairead Dunphy and TJ O'Connor hand over the cheque to Mary Fitzgerald from Comfort for Chemo. The funds were raised from this year's 54321 Challenge.

Angela O'Connor, Marian Kelly, Helena Hanafin, Mairead Dunphy, Siobhan O'Sullivan, Maryanne Leane and Celine Roche took on the ninth annual 54321 Challenge and raised a total of €58,325 for this year’s selected charity Comfort for Chemo Kerry, which they handed over to the charity this week.

The seven participants undertook the four-day challenge, which took place from Thursday August 19 to Sunday 22 inclusive.

They endured all sorts of weather during the epic challenge.

"Day one saw the team taking on the Ring of Kerry leaving Killarney in the early hours of the morning," TJ O'Connor, who is one of the organisers, said.

"The weather conditions were mixed but this did not dampen the spirits of these amazing ladies. They were met with great support along the route and even danced a polka set in Waterville along the way. Day two saw the team climbing Carrantuohill, despite heavy rainfall over night, the heads were up, and the singing voices were on and a massive thanks to our guide Patricia O'Sullivan on the day who knows the mountain like the back of her hand. The clouds lifted for a while on top of the mountain and they had some of the clearest views to be seen on the Reeks. Day three saw them cycling to Cahersiveen and then climbing Cnoc Na Tobair, where the ladies took to literally rolling down the mountain in an effort to send the message out to keep the donations rolling in. The final day, day four, they took to the Skellig Ring and took in Valentia, Portmagee, St Finians Bay and Ballinaskelligs. Unfortunately again the sun was scare, but the heads were up and the eye was on the finish line."

A major contributor to this year’s fundraising efforts were a number of Spinathon days where this year's participants, volunteers from Comfort for Chemo, family and friends took to the streets in different locations around the county on spinning bikes, including Killarney town which brought in over €6,000 at one location, he added.

"This brings the total raised to date €300,000 supporting a number of very deserving Kerry charities over the years. On behalf of Comfort for Chemo and the 54321 Challenge team we would like to say thank you to all those who have sponsored and supported us along the way.

“If the last 18 months has thought us anything, it is to be thankful for what we have, our health is our wealth, and the power of people working together can get us through some of the most difficult situations."

Town building to light up purple for international day