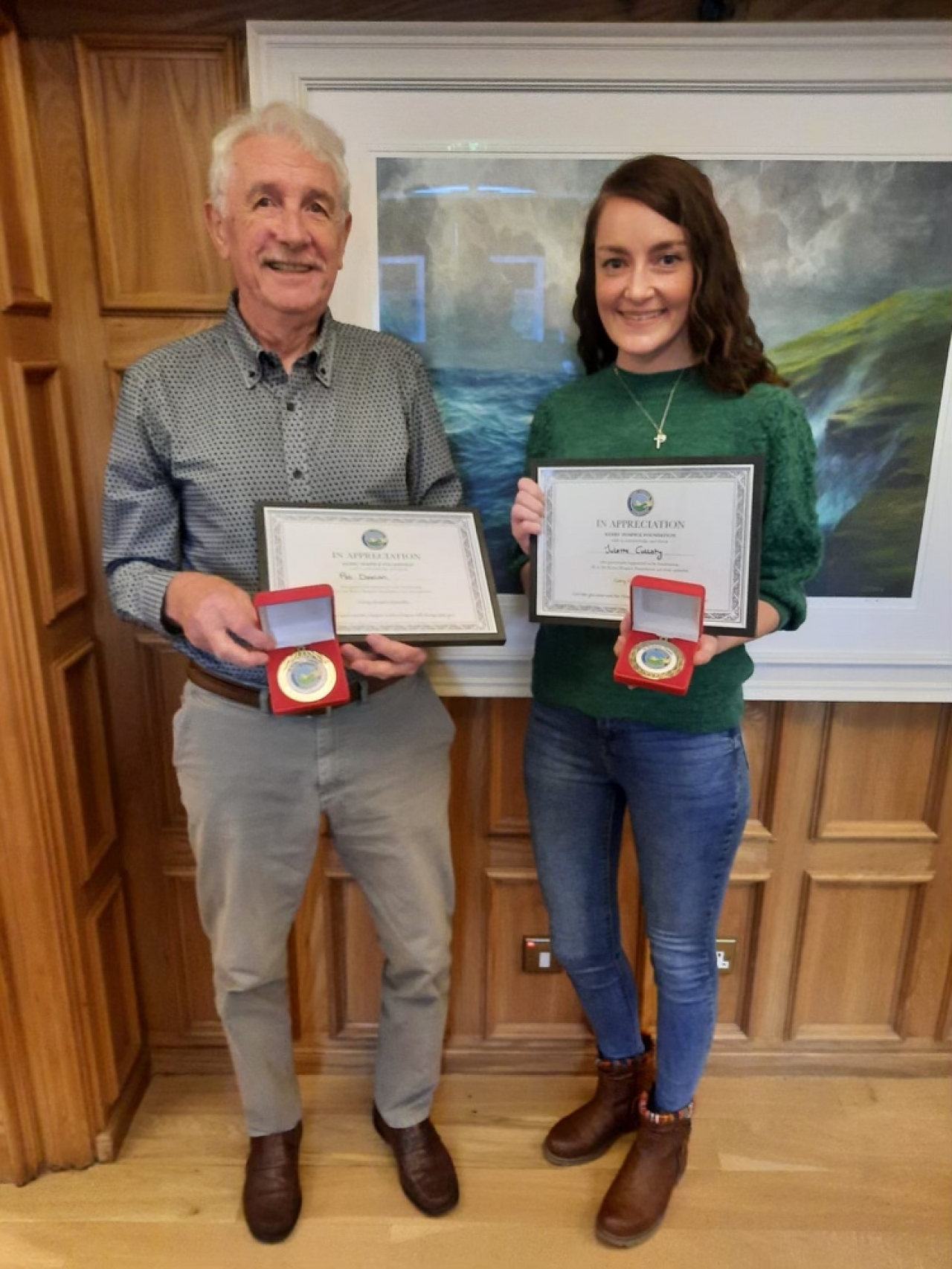 WELL DESERVED: Volunteers with the Kerry Hospice Foundation Pat Doolan and Julett Culloty received an award on Sunday for their great work with the charity.

They give their time generously to a very worthy cause, so it was no surprise that two local volunteers received an award on Sunday.

The duo, Killarney's Pat Doolan and Rathmore's Julett Culloty, are very actively involved in the Kerry Hospice Foundation (KHF) charity activities and were recognised for their great work at the Volunteers Recognition Afternoon in the Meadowlands Hotel Tralee on Sunday. They were nominated by the Killarney Hospice Branch.

"Some of our wonderful volunteers were honoured for their wonderful and tireless work," PRO of the KHF, Andrea O'Donoghue, said.

"Jack Shanahan opened proceedings where he told all that in the last number of years a whopping €12 million has been raised. Deirdre Walsh, our ambassador, was MC for the day. We are very lucky in the Kerry Hospice Foundation to have amazing volunteers who are so committed to the cause. The biggest cheer of the day went to Mary Daly of Cahersiveen who, at the age of 92, is still involved in local coffee mornings and hospice events in her local area. A big thank you to all in the Meadowlands who went to huge effort for the day out and sponsored all the refreshments on the day, also to the O'Shea family for entertaining us as always a great support to the foundation."

"Every volunteer across the county works so hard and gives of their time so freely," Julett told the Killarney Advertiser.

"I love being able to help out for such an amazing foundation so I was truly honoured to get an award. It was a special day for all Kerry Hospice volunteers."

Pat said that he felt "honoured" to have been nominated by his peers.

"I feel privileged to be a volunteer with such a great organisation."

This year's Christmas Card selection were also unveiled by Ciara Griffin at the event.

Ciara is a former Munster and Ireland Rugby Captain and recently took part in RTÉ's Ultimate Hell Week, and nominated Kerry Hospice as her chosen charity for which the charity is truly thankful.

"This year we enlisted the help of artists around the county to come up with creative designs for the collection," Andrea said.

"We were delighted with the response which garnered about 40 entries so it was a difficult task to whittle down the number to the 10 we unveiled. We really appreciate the artists allowing us use their work."

She added that the project would not be as successful as it is without the incredible support of Kerry Group who generously sponsor the production of the cards.

"We were delighted to have Tony Bergin from Kerry Group in attendance."

"We are confident the cards will be popular again this year - a pack of 10 cards costs €7 and will be available from Kerry Hospice branch members and at various outlets throughout the county."

BBC appearance for Kilcummin man and his sheepdog