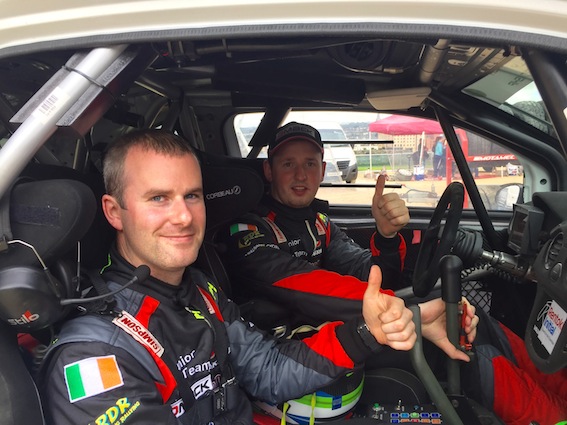 CELEBRATIONS were the order of the day as Killarney’s Rob Duggan and Ger Conway took top honours in the Junior category of the John Mulholland Motors Ulster Rally at the weekend, clinching the DMACK Junior title in the British Rally Championship. This was their fourth Junior win of the year.

This lucrative prize provides funding for Duggan, last year's Motorsport Ireland Young Rally Driver of the Year and the current holder of the Billy Coleman Award, to take a huge step forward in his rally career by tackling five rounds of next year's World Rally Championship.

The only problem Duggan had during the two days of stages in the Sperrin Mountains was when he bent a suspension arm on his Vauxhall Adam on the second of fourteen stages, but his service crew replaced it and he stayed well clear of his title rival, Sindre Furuseth of Norway, to the finish, winning by almost two minutes.

Outright winner of the Ulster Rally was Welshman Elfyn Evans, who also took the overall British title in his Fiesta. He led for most of the event, with three times champion Keith Cronin of West Cork his closest challenger until late problems dropped Cronin's Citroen DS3 to fifth place.

With just three stages left, the worried looking Corkman arrived back into service in Derry city with gearbox problems. His crew managed to change the unit, but he was still unable to select gears, and the extra lateness this cost him dropped him behind NI drivers Alastair Fisher and Jonny Greer, and Scotsman David Bogie.

Cronin's hopes of winning the Clonakilty Blackpudding Tarmac series now depend on a good result in the final round, the Acesigns Cork 20, in October.