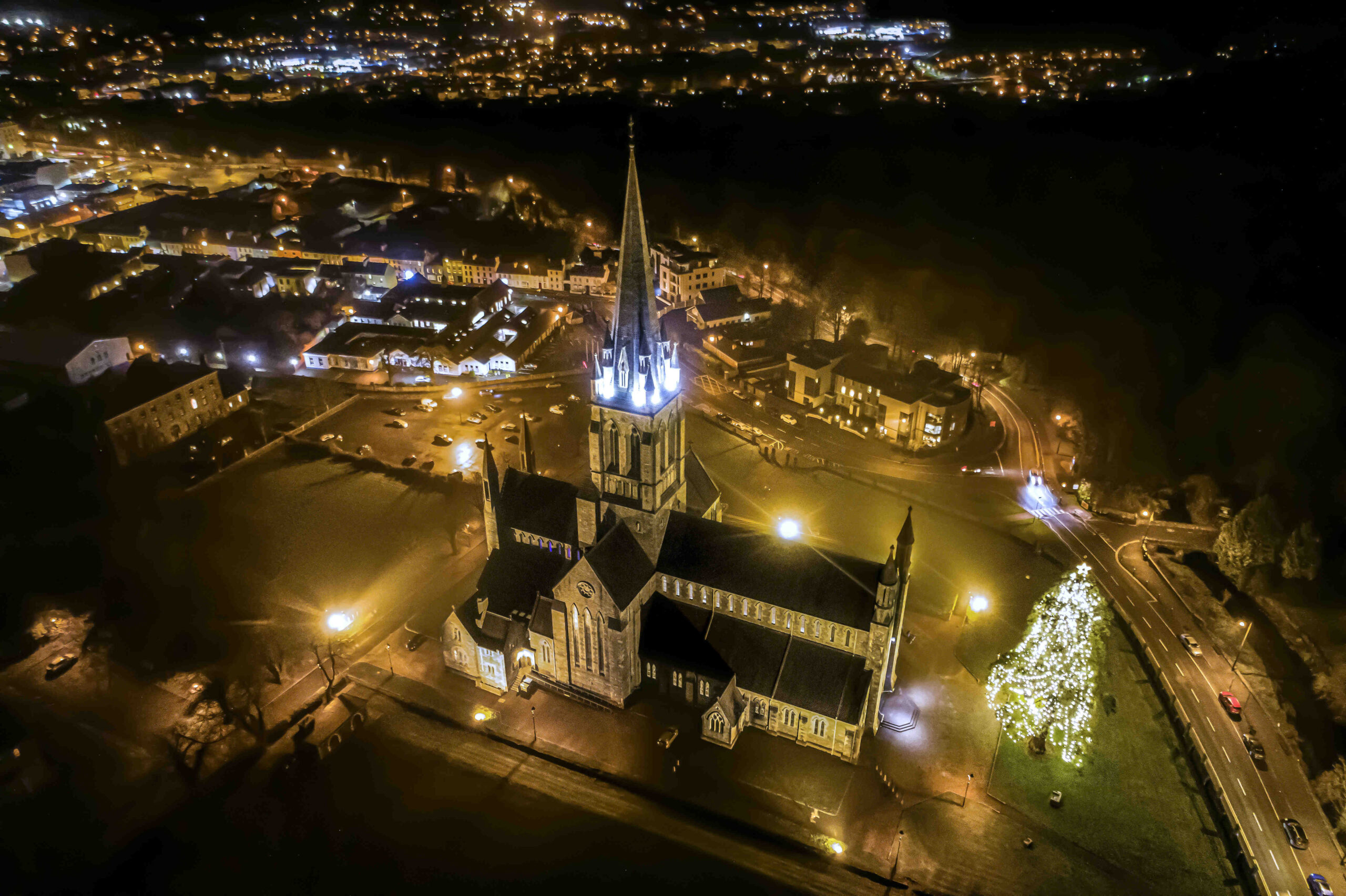 The Tree of HOPE...The iconic Californian Redwood tree on the grounds of St Mary’s Cathedral, Killarney, will continue to shine for the month of January. With the number of Covid-19 infections continuing to rise and many families encountering very worrying times. The bulbs will continue to shine until the end of the month, offering a sense of hope and bright days to follow. Killarney Parish Administrator Fr Kieran O’Brien together with Killarney Chamber of Tourism and Commerce members and President Niall Kelleher, made the decision not to switch off the Tree of Light, at the close of the Christmas season, and rename it 'the tree of hope' Photo: Valerie O’Sullivan/ FREE PIC

A spectacular 100ft century old tree embellished with 3,000 sparkling bulbs, which became the focal point of the Christmas celebrations in Killarney, will remain lit until the end of January as a gesture of hope during the COVID-19 pandemic.

​​​​​​​
With the number of infections continuing to rise and many families encountering very worrying times, a decision was taken not to switch off the Tree of Light, on the grounds of St Mary’s Cathedral, at the close of the Christmas season.

Instead, the bulbs will continue to shine until the end of the month by which time, it is hoped, the country will be in a much better place in terms of Coronavirus numbers.
The plan to continue lighting the tree on a nightly basis was agreed by Killarney Chamber of Tourism and Commerce and Killarney Parish Administrator Fr Kieran O’Brien and the Tree of Hope idea had been suggested by Killarney photographer, Valerie O’Sullivan, to brighten the dark nights at a time when everybody needs a boost.

“It is a spectacular sight and we hope it will continue to give the people of the town a lift in the early weeks of the New Year," ​​​​​​​newly elected Killarney Chamber President and Kerry County Council member, Niall Kelleher, said.

Cllr Kelleher said the tree project was a demonstration of the great spirit of togetherness that exists in the town and it sends out a strong message that even in very dark days, people can take hope that the light is never far away.

“Life won’t get back to normal straight away but, when it does, we will be ready. In the meantime, we must stick together, secure in the knowledge that the good days will return.”

In the early days of the pandemic last April, health care frontline staff, including a local doctor, Gardaí, Order of Malta and Civil Defence volunteers and firefighters, joined senior local authority officials and the town’s business leaders in a moving show of cross-community co-operation by gathering at the cathedral tree which was lit for one hour.

The 100-year-old Californian Redwood tree was first lit in 2000 to mark the new millennium year when it commemorated all those who lost their lives in the conflict in Northern Ireland and it was sparkling again in 2010 to remember those who had been killed on Irish roads.

Liaison officer to be appointed to Killarney road schemes