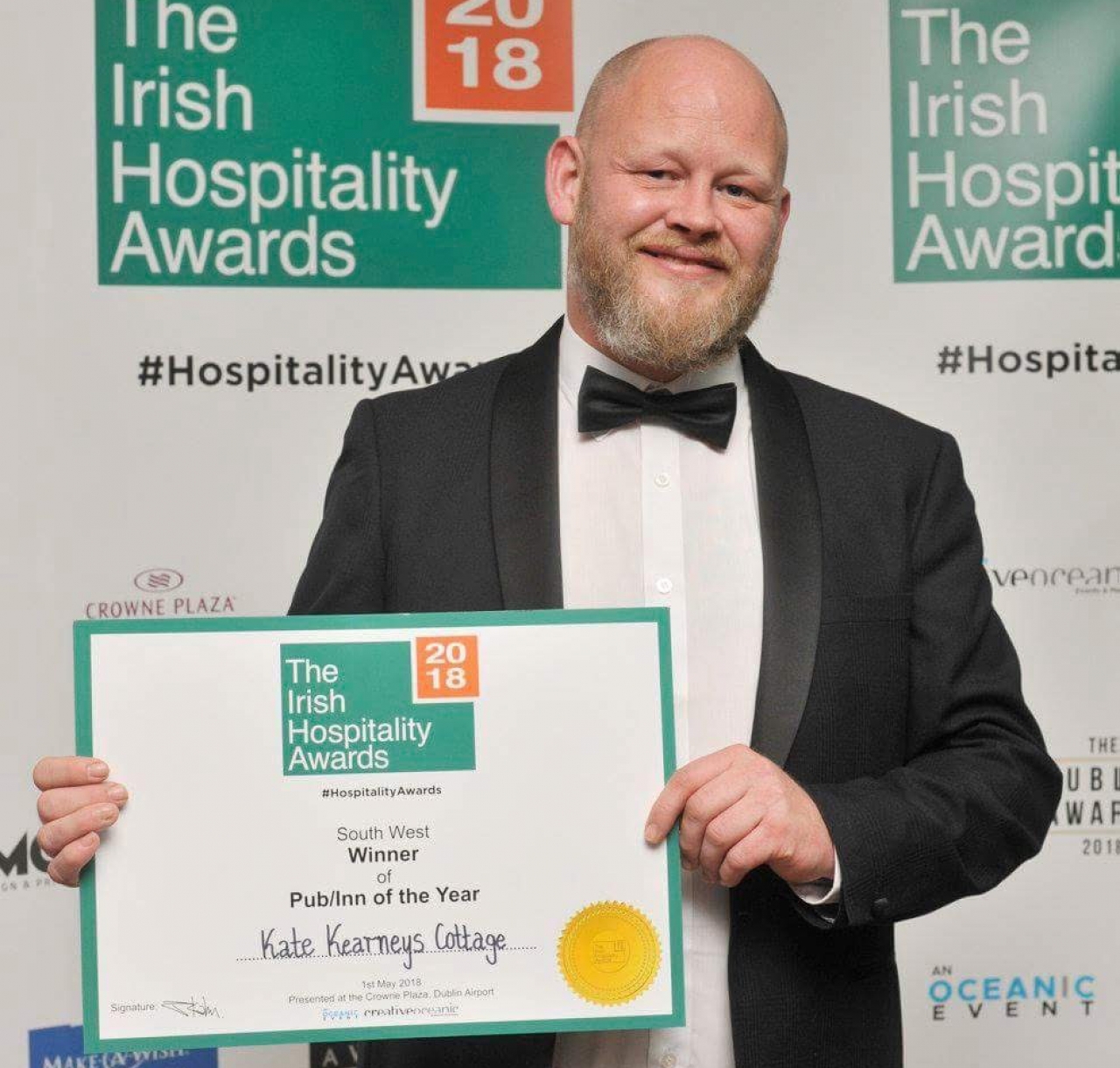 RECOVERING: Sean Coffey from Kate Kearneys is recovering this week and has thanked everyone for their well wishes.

Thousands of messages have poured in from all over the world and that simple act of kindness has helped lift the spirits of one local businessman - who, after a enduring one of his toughest years in business, suffered a heart attack.

This week, Sean Coffey (41) who runs Kate Kearney's, praised the hospital staff for his care saying they 'saved his life', thanked his dedicated staff for their "phenomenal commitment" in a sector which is severely short staffed at present, and also said the messages flowing in helped keep him going.

Working 90 hour weeks to mitigate the COVID challenges and its affects on business resulted in Sean's health taking a serious and sudden decline.

This week he went public online reacting to a few bad reviews on Tripadvisor calling on people not to go on the Internet and complain but to take any issues up with owners. He also called on them to try to understand what the hospitality industry across the board is currently experiencing.

"We've had a few complaints, not directly of course, we could have explained what's going on (TripAdvisor), about our aluminum trays and the fact that we didn't have water. Please forward all water complaints to Kerry County Council or Irish Water Uisce Éireann. This has been an issue for us for decades and is completely out of our control. So here's the story! We are understaffed by at least 50% in all departments. The reason we're using tin foil trays is because we are operating as a take away. Our pricing reflects that! All dishes are priced about 30% below restaurant service price. Would we like to operate as a restaurant again? Yes, obviously! But we have no one in wash up, an extremely limited culinary team and even as a take away we can only operate 5 days a week. We can not use plates because we have no one to wash them! It's that simple".

Sean is the seventh generation working in the business which was established 172 years ago.

This week he told the Killarney Advertiser that he has now hired a manager as he has been told to take six weeks off work, and added that he is making a good recovery.

"I'm feeling good now, I'm home and I'm out for the next six weeks and I'm going to make full use of it. I'm forcing myself to take a break - a back seat - I'm trying to take it easy."

He said at his age a heart attack "is the last thing you'd think".

"I thought I had COVID. I had aches and pains, tightness in my chest, trouble breathing and a pain in my left arm."

Of the reviews he said that you have to take the good and bad on board and added that finding staff at present is difficult and this will ultimately result in some issues.

"All reviews good, bad or indifferent, are earned. We're doing our absolute best here, it's all we can do."

He praised his "phenomenal" staff as well as the team at the Bon Secours for their care.

"A massive thank you to the team in Kate's and the customers from literally all over the world for all their well wishes and messages. It's pouring in, it's amazing. It really did lift me while I was in hospital, that people cared, and it meant so much," he said.

"Also a massive thank you to all the staff in the Bon Secours, they were truly, simply amazing and put two stints in my heart in three hours."

He also said the support from his immediate family has been "incredible".

By Sean Moriarty With the National Basketball League set to get underway in two weeks’ time, Scott’s Lakers St Paul’s Killarney Basketball Club are still unsure where they will play their homes games this season as their usual venue is being used as a COVID-19 vaccination centre. The local side play Limerick Celtic away on […]

With the National Basketball League set to get underway in two weeks’ time, Scott’s Lakers St Paul’s Killarney Basketball Club are still unsure where they will play their homes games this season as their usual venue is being used as a COVID-19 vaccination centre.

The local side play Limerick Celtic away on the weekend of October 8 and 9 and their first home game is set for October 16.

Currently their home venue at Killarney Sports and Leisure Centre is unavailable as it is being used as a COVID-19 vaccination centre and according to the Health Service Executive (HSE) this week, there are no plans in place, as of yet, to move out.

Killarney Cougars, the town’s newest addition to the National League, has secured the use of the gym at St Brigid’s Secondary School in the town centre but, as it stands, St Paul’s remain homeless as the season opener looms.

“It is ridiculous at this stage,” said head coach Jarlath Lee. “If you look at what is happening at the Sports Centre, there are very few people in and out of there now compared to the start [of the vaccination roll-out].”

The HSE when contacted by the Killarney Advertiser this week said that they would not be adding to a previous statement issued earlier this month, which said: “In relation to Killarney Sports and Leisure Centre, we are very grateful to staff and management for the use of their facility as a vaccination centre.

“Planning work is well underway for the next phase of the vaccination programme, locally and nationally. This includes a review of where vaccinations are administered in future, but we cannot confirm any decisions in relation to any particular location at this point in time.”

However, the HSE did confirm this week, that the Tralee Vaccination Centre, located at the Munster Technology University, will re-locate to the recently vacated Borg Warner factory in the town. The move is expected to be completed within the next week to 10 days.