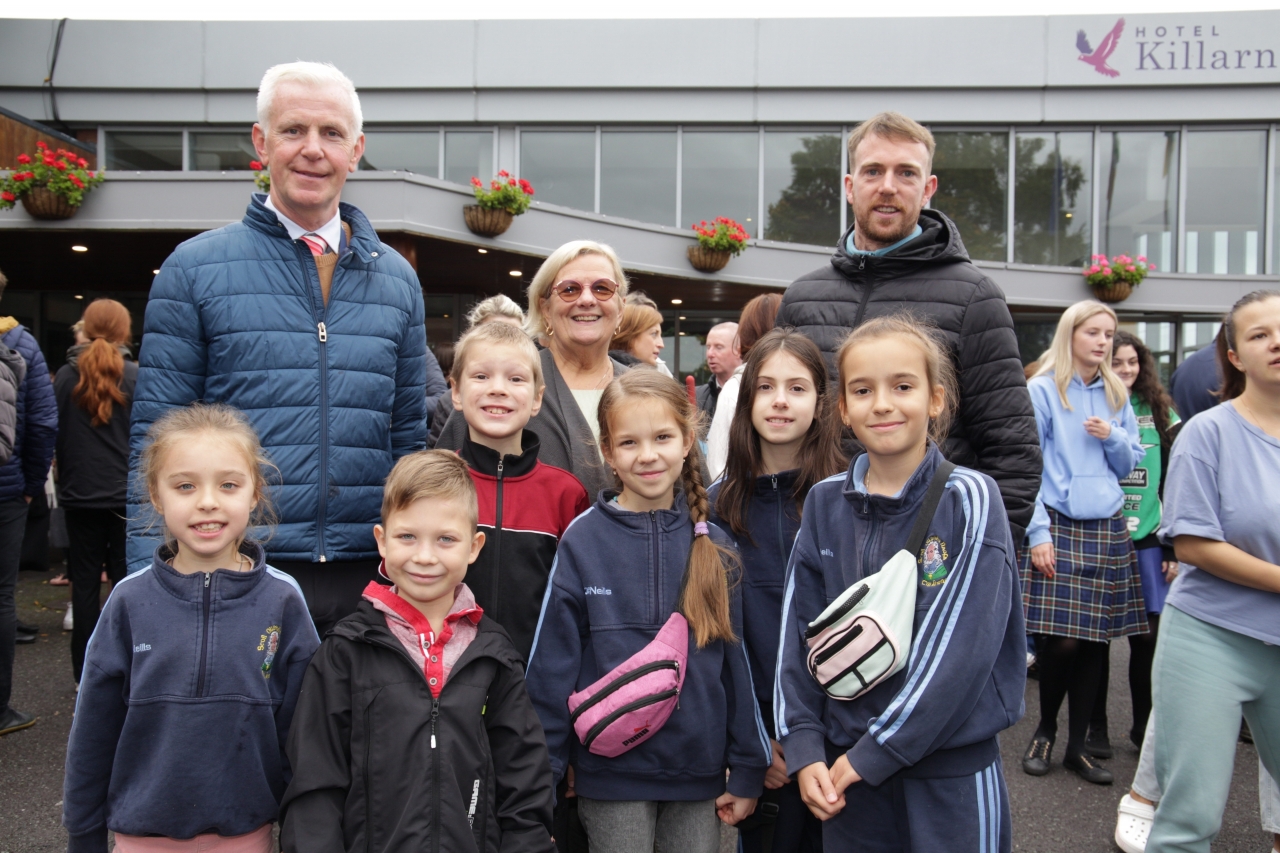 STAYING: Principal of St Oliver's NS Colm Ó Súilleabháin with Sheila Casey (Chairperson KASI) and St Oliver's teacher Cian Tobin pictured with some of the Ukrainian children who were living in Hotel Killarney since March. All were delighted with the Government's u-turn that the Ukrainians can now stay in Killarney.

* Reversal of the decision to move made at the last hour

The 135 Ukrainian women and children - who were given just 48 hours to pack their lives up and move 300kms across the country - now face further upheaval as they have no idea if, or when, they'll have to pack up and move again.

The war-torn refugees were relieved and emotional to hear at the last hour that they could stay in Killarney. The 48 hour notice to leave by letter came after the unexpected arrival of 192 asylum seekers to the Hotel Killarney at 11am one night last week which left the women and children shocked.

It was decided by the Department of Children, Equality, Disability, Integration and Youth that the Ukrainian women and children, who have been settling into life in Killarney, including securing jobs and school places since last March - would have to move out of the county.

In response to a query from the Killarney Advertiser earlier this week, the Department of Children, which is overseen by Minister Roderic O'Gorman TD, said that Hotel Killarney was originally meant to host International Protection applicants - or asylum seekers.

The Ukrainians, they said, were housed there temporarily and would have to be moved to Mayo - or the newly arrived asylum seekers would face homelessness.

Against a huge backdrop of opposition from the community and political leaders, including a huge gathering at the hotel on Wednesday morning, Education Minister Norma Foley made the announcement that they could stay in Killarney - just one hour before they were to board the bus to Mayo. The issue was also raised in the Dáil on Tuesday afternoon by TD Brendan Griffin.

Now they're settling in to IPAS (International Protection Accommodation Services) approved accommodation in multiple locations across the town - but for how long - they don't know.

And with the arrival of a further 100 women and children asylum seekers to Hotel Killarney yesterday (Thursday) and 25 men on Tuesday, KASI (Killarney Immigrant Support Centre) Chairperson, Sheila Casey, said that the system "is at breaking point".

"They should have gotten more than 48 hours notice, it upset a lot of people," she told the Killarney Advertiser.

She said that the women and children from Ukraine have no idea how long they will be allowed to stay in their new accommodation.

"They don't know if it's permanent."

"There seems to be no joined up thinking. Communication between IPAS and inter-agencies - we're not being fed any information and we're the people on the ground. The whole thing has been handled very badly. I don't know where the breakdown is."