It’s been revealed this week that the Killarney Advertiser is the NUMBER ONE choice when it comes to local news – against all other printed newspapers and magazines in Killarney.

The Killarney Outlook, Kerry’s Eye and The Kerryman fair poorly in the survey with a combined eight percent of respondents citing them as a source for ‘what’s going on in Killarney’.

In comparison 26 percent of people seek out the Killarney Advertiser as their news source locally.

Voted by you, the figures, which had 1,332 responses which covered a range of all ages from young to older readers, were released in the ‘Let’s Talk About Town’ Killarney Chamber of Tourism and Commerce survey.

In your opinion it proves that Killarney’s ‘Favourite Friday Read’ continues to be at the heart of the community each Friday, and with availability at over 230 locations there is always an opportunity to pick a copy up.

The social media category – which the Killarney Advertiser also falls into with our strong online presence with daily updates and breaking news – won out with a 37 percent share across all age groups. Between traditional and online media outlets the Killarney Advertiser proved the best, followed by killarneytoday.com at 22 percent, Radio Kerry coming in at seven percent, Killarney Outlook at four percent, while both The Kerryman and the Kerry’s Eye share four percent between them.

The findings were collated by the Institute of Technology in Tralee. 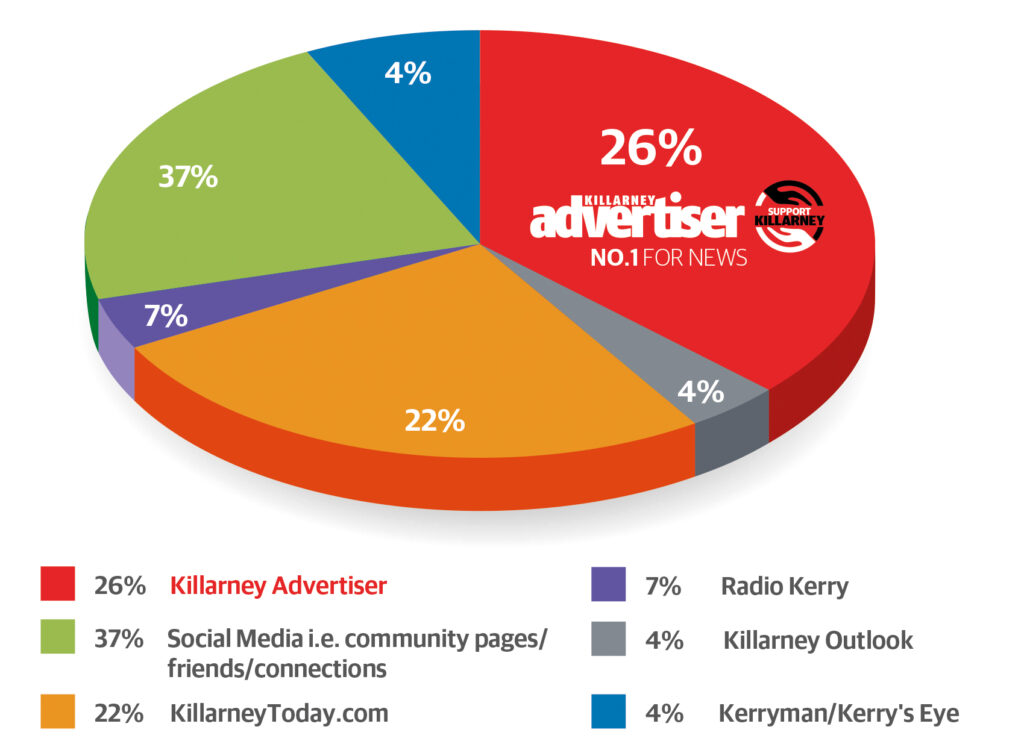 The survey revealed that none of the respondents under the age of 18 rely on The Kerryman or Kerry’s Eye to find out what is going on in Killarney, while Radio Kerry’s strongest segments are the youngest and oldest age groups.

“We work very hard every week to bring the latest breaking news, exclusive stories and community news to our readers,”

“We have a very loyal readership as well as a solid following online, and offer great pricing to our advertisers.”

And the Killarney Advertiser has innovative plans in the pipeline including new video marketing campaigns and online advertising as an added option.

“We are always improving our product to bring the very best to our readers and advertisers. We’d like to say a huge thank you for your continued support.”

Top award for Jill and her staff!