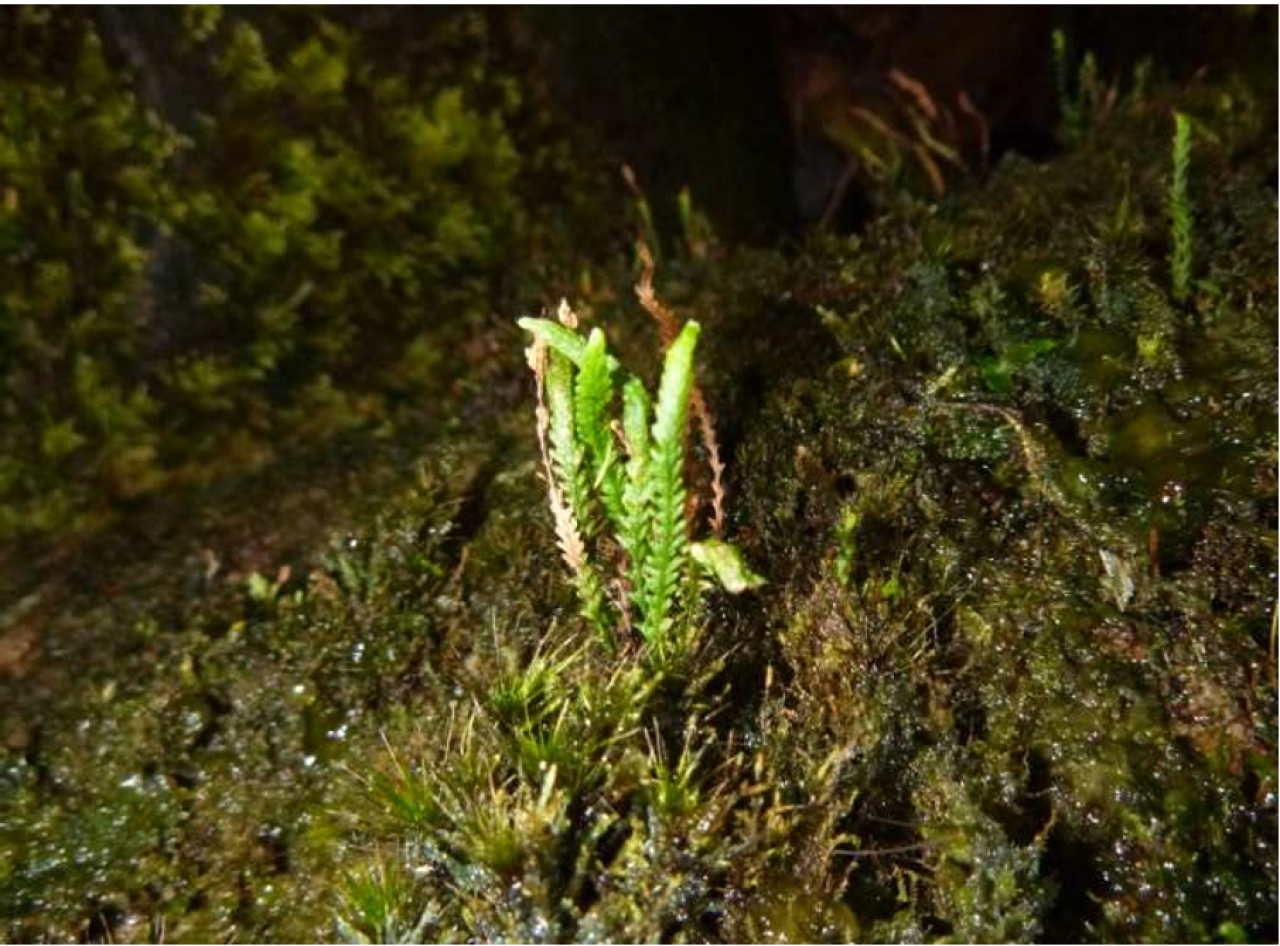 Killarney National Park is still capable of revealing secrets - as two years after a new species to Europe was first discovered there - a second population of the Kerry Mousetail Fern has been discovered.

Kerry Mousetail fern (Stengrammitis myosuroides) was found in a very remote woodland in the uplands of the National Park, over 4km distant from the previously known location.

Six plants were found to be present on a vertical rockface above a stream, one of which was fully mature and producing spores. This discovery proves that this species is fully established in the Killarney National Park, and is not merely a transient colonist that will quickly disappear again.

The Kerry Mousetail Fern was first discovered in Killarney National Park in July 2019, as a new species to Europe. This species was previously found only in the Caribbean, in the tropical cloud forests of Jamaica, Cuba and the Dominican Republic, and is a member of a group of tropical ferns known as the Grammitid ferns, of which no members had been previously found in Europe, aside from in Macaronesia, a collection of four volcanic archipelagos in the North Atlantic Ocean, off the coasts of the continents of Africa and Europe.

The National Parks and Wildlife Service (NPWS) at the Department of Housing, Local Government and Heritage believe that this species arrived in Ireland without human intervention, with the most likely explanation being that its tiny spores travelled across the Atlantic on the wind and happened to land in a place where conditions were suitable for it to grow.

“It is not clear how long this species has been present in Ireland and only 40 plants were found on two rocks in one location, making it an extremely vulnerable and threatened plant,” a spokesperson said this week.

The National Parks and Wildlife Service (NPWS), in its quest to add to the knowledge of the range of species and habitats under its remit, have over the last two years embarked on a suite of taxonomic and botanical surveys in Killarney National Park, with a particular focus on niche specialists. As part of the survey scheme NPWS engaged leading specialists in a number of fields, including independent botanical researcher Dr Rory Hodd.

It is not known when the rare plant first established itself in Killarney National Park, widely regarded as one of Ireland’s richest and more diverse National Parks.

The NPWS is looking into the suggestion that it has survived undetected in the area for at least a number of years, and may not be a recent arrival, having possibly been present for decades, centuries or even longer. Due to its very small size and tendency to grow in remote areas, it would be very easily overlooked by generations of botanists.

However, the fact that it has now been found in two disparate areas means that it is very likely that the Kerry Mousetail Fern occurs elsewhere in the National Park, or further afield, as many pockets of similar habitat exist where conditions are suitable for its growth. This discovery puts to rest any doubts that may have existed about whether this enigmatic Neotropical fern can be considered a full, established member of the Irish flora.

By Sean Moriarty The question of pedestrianisation in the town centre has divided Killarney for years but a survey by the Killarney Advertiser this week shows the town slightly more in favour of it. A total of 37.14 percent of respondents want the pedestrianisation of Plunkett St to remain as it is – closed to […]

The question of pedestrianisation in the town centre has divided Killarney for years but a survey by the Killarney Advertiser this week shows the town slightly more in favour of it.

A total of 37.14 percent of respondents want the pedestrianisation of Plunkett St to remain as it is – closed to traffic on a permanent basis while 24.76 want it to go back to its pre-pandemic arrangement where the street was only closed to vehicular traffic between 7pm and 7am each night.

An additional 34.29 percent want to see an increase in pedestrianisation in town centre by extending the Main St arrangement that was in place during the summer. In that period the town’s main thoroughfare was closed to traffic, day and night, during the weekend.

Only 20 percent of the respondents want to abolish pedestrianisation altogether, but that is still a significant number ensuring that this debate will linger on for a long time yet.

By Michelle Crean A local group hosting a life-saving information day tomorrow (Saturday) are to receive huge exposure on national TV after a crew came down to interview them about their campaign. Members of Killarney Cardiac Response Unit (KCRU) – who are planning a ‘Restart a Heart Day’ to raise awareness about life-saving techniques – […]

A local group hosting a life-saving information day tomorrow (Saturday) are to receive huge exposure on national TV after a crew came down to interview them about their campaign.

It’s hoped their campaign will be broadcast tonight (Friday) or tomorrow (Saturday).

The KCRU event takes place tomorrow in ANAM Arts and Cultural Centre between 10.30am and 4pm as part of the European Restart a Heart Day. It’ll include CPR demos, public information, an art display, a video launch w️ith many prizes to be won.

“European Restart a Heart Day was founded with the support of the European parliament and takes place on October 16 every year. We’re spreading the message that 20 minutes of your time could make all the difference saving a life.”

In 2021, the focus of the event is on survivors with the hashtag #CPRSavedMyLife.

“With this campaign we want to create awareness that everyone can learn CPR and facilitate BLS courses in schools and public locations.”

He said they hope that Kerry TDs Danny Healy-Rae, Brendan Griffin and Minister for Education Norma Foley will be in attendance throughout the day, and the public are invited to attend.

“Find out how simple actions can save lives. Prizes include a three day First Aid course valued at €300, two First Aid kits, and a voucher for a local business.”

By Sean Moriarty The question of pedestrianisation in the town centre has divided Killarney for years but a survey by...

By Michelle Crean A local group hosting a life-saving information day tomorrow (Saturday) are to receive huge exposure on national...

By Sean Moriarty The volunteers behind Killarney Mountain Meitheal will be featured in a short documentary to be screened during...

Film fans will have plenty of variety this weekend

By Michelle Crean It was yet another very special birthday for Ireland’s oldest man as Michael J O’Connor celebrated turning...

by Adam Moynihan After a frustrating year-and-a-half of inactivity due to COVID-19, Killarney’s two Men’s National League teams will finally...