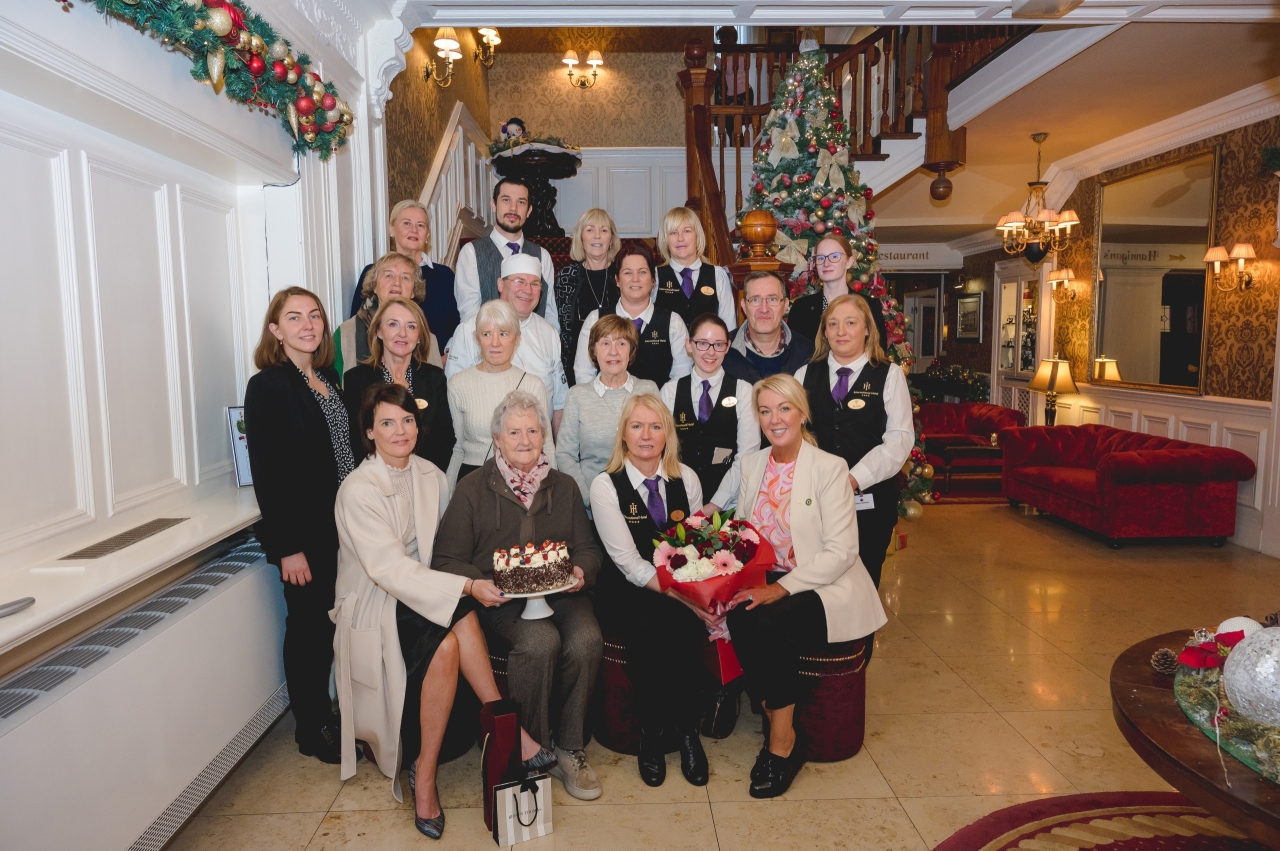 SURPRISE: It was a 'surprise' for popular waitress Patricia O'Doherty who has 40 years of service at the International Hotel pictured on Monday with her co-workers. Front row l-r: hotel owners Tracy and Frankie Coyne Patricia O'Doherty and hotel manager Catriona White. Photo: Marie Carroll-O'Sullivan

With great fondness and a few tears, Frankie Coyne led the team at the International Hotel this week in a tribute to Patricia O’Doherty.

Frankie, being the only individual that pre-dates Patricia at the International Hotel, recalled the story of Patricia joining the team back in 1982 when her mother-in-law Kathleen O’Doherty, herself a great stalwarth in the dining room at the International, introduced her brand new daughter-in-law as a young chef to then manager Liam Kelly.

However, after a few weeks, and having decided it was a little hot in the kitchen for her liking, Patricia convinced Liam that she had plenty of waitressing experience and she would love a move to the dining room!

Notwithstanding this little white lie, Patricia was a brilliant addition and over the years since then, has led the team with great patience and calmness, two of her best qualities!

During her tenure, two of Patricia’s children, Keith and Carla joined her at the International making it a family affair and Patricia still works three days a week serving breakfast and says that she just loves meeting guests old and new, and of course loves working alongside the team who have become family over the years.

A special mention was given to John Thompson who Patricia says is surely not long behind her in length of service and when his time comes, Patricia will be the first to congratulate him too!

Frankie spoke a little about the changes in the hotel over the years since she and her late husband Sean bought the hotel in 1976 with 143 bedrooms musing how many guests Patricia and her team have fed over all those years.

On her own behalf, and on behalf of those from the International Hotel who are no longer with us, she gave sincere thanks to Patricia for all the years so far, and the many more years to come!

Her lovely words of thanks to Patricia and the whole team for making the International Hotel what it is ensured there was hardly a dry eye in the room.

Ukraine children give the gift of gratitude