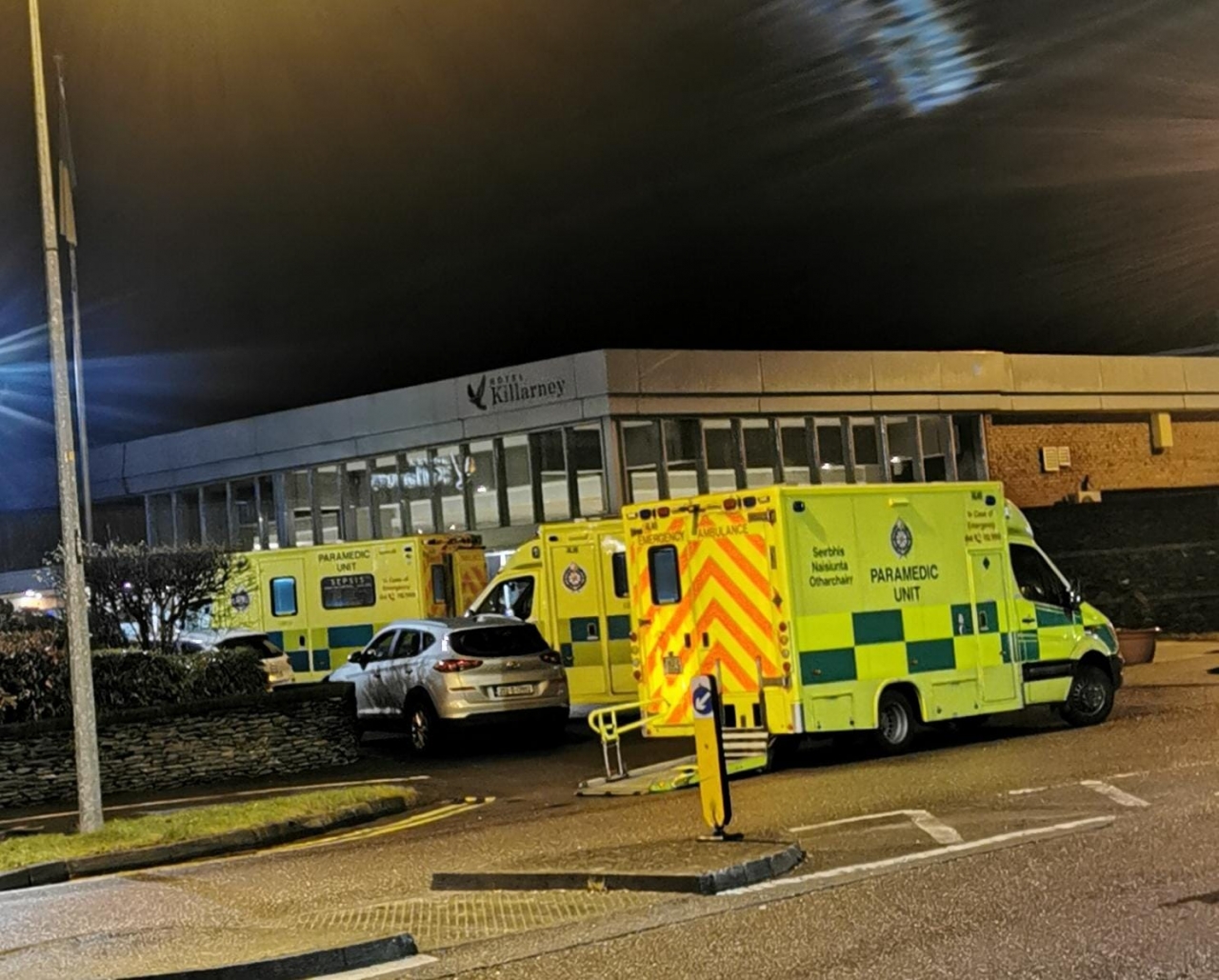 SCENE: Emergency services attended the scene of the fracas on Park Road on New Year's day.

Seven of the eight men arrested following a mass brawl on New Year’s day have been moved to other Direct Provision centres in four different parts of Ireland.

Up to 20 men which included four to five Algerians, and between 10 and 15 Georgians - were involved in the melee at Hotel Killarney on Park Road which is currently being used to house up to 400 International Protection applicants.

The incident happened about 8.30pm on New Year’s night.

Several gardai and up to six ambulances were deployed to the scene. Four people in the hotel were taken to hospital after suffering non-life-threatening injuries in the incident. Two were taken to a Cork hospital while the others were taken to University Hospital Kerry and Gardai confirmed that they have since been released.

Six men were arrested on Monday concerning the incident and were held in Tralee and Killarney Garda Stations ahead of court appearances this week.

Two more men were arrested on Tuesday and also appeared in court this week.

Following the court appearances seven of the men were bailed and have been transferred to other Direct Provision centres in Cork, Clare, Laois and Louth.

They have been ordered to stay away from Killarney unless attending official appointments like court sittings or solicitor's meetings.

The eighth man, who is alleged to have brandished a weapon during the fracas, remains in custody after being charged under the Public Order Act and the Firearms and Offensive Weapons Act.

Killarney Gardai confirmed to the Killarney Advertiser that the incident is still under investigation. A spokesperson confirmed that up 20 people were involved in the incident.

“Further arrests are likely to be made in relation to this case,” the spokesperson told the Killarney Advertiser.

A spokesperson for Taoiseach Leo Varadkar told the Killarney Advertiser that Ireland is now accommodating over 71,255 people throughout the country, between those fleeing Ukraine and International Protection applicants.

"The government fully understands the concerns in relation to the incident in Killarney. This is now a matter for An Garda Síochána and it is not appropriate to comment on a live investigation. Since the incident occurred, the International Protection Accommodation Service has engaged and continues to engage with the staff and residents of the centre in order to ensure that all necessary supports are being provided.

"Government is continuing to explore a wide range of options to address the accommodation needs of the high numbers who are seeking protection here. Several strands of activity are underway, aside from hotel accommodation, to maximise a range of alternative options, including roll-out of a rapid-build housing programme."

‘Why wouldn’t you go for a man of his calibre?’ – Crokes chair explains Mahony appointment