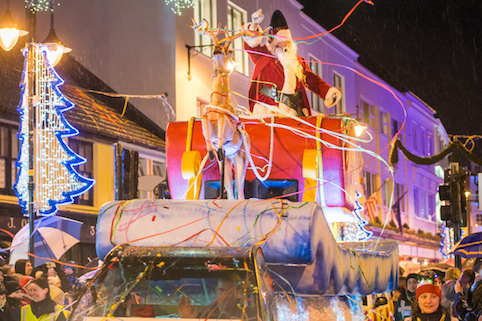 THAT seasonal sense of anticipation has been filling the town for the past week. The Christmas garlands are already festooning the streets and enchantment is already in the air as the countdown begins to the 2016 Christmas in Killarney Magic Parades.

The perfect way to kickstart the Christmas celebrations, the first of the Magic parades for this festive season will take place on Friday, November 25, when the streets of Killarney will be illuminated in fabulous festive fashion and will be filled with music, colour and a whopping 11 floats.

The Magic parades always offer a top-class night out for all the family, and the first of these, on November 25, will see the children’s parade commencing at 6pm and featuring Santa and his elves. The parade will, of course, culminate in the switching on of the town’s Christmas lights.

Santa Claus has confirmed that many of his friends will join him on the night including Minnie and Mickey Mouse as well as Frozen stars Anna, Elsa and Olaf. Not only that, but a host of famous Disney celebrities the parade will also be joined by children from local schools.

You’ll get a bird's eye view of Santa all along the parade route which takes in New Street on to Beech Road, Mission Road, then Main Street and back down New Street. If you miss Santa and his friends on the 25th don’t worry, there will be a Christmas parade on Saturday, December 3, December 10 and 17 at 6pm. “Christmas in Killarney is pleased to announce that 2016 will see the return of the New Year’s Eve parade on December 31, at 6pm,” said a spokesperson.

“When speaking to Santa he informed the Christmas in Killarney committee that there is still time to make the nice list if you are on your best behaviour for December and to make sure you post your letters in plenty of time.”

For further information on the Christmas in Killarney events log onto www.christmasinkillarney.com

Catherine Fulvio cooks up a festive feast at Muckross Park