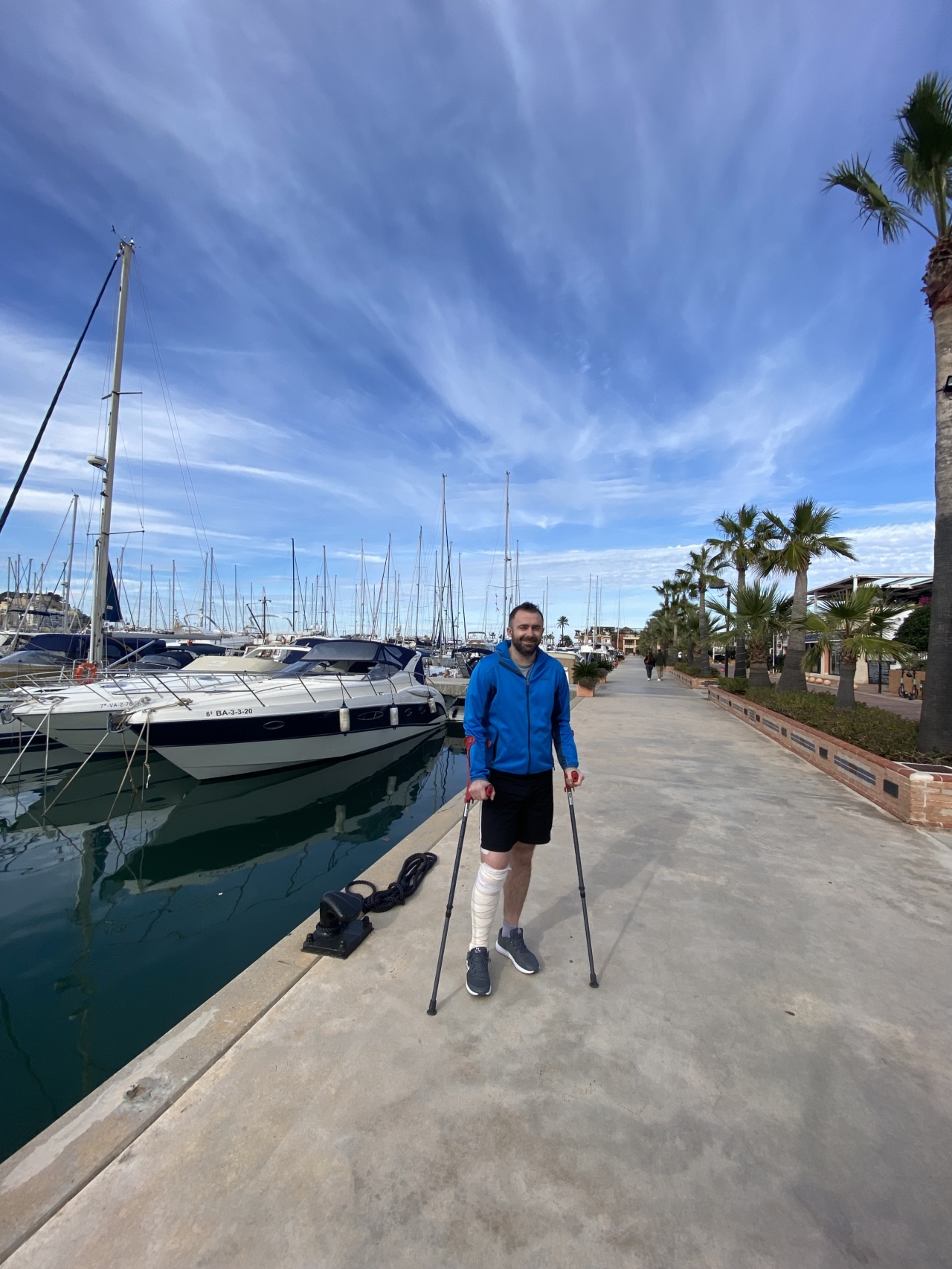 Rory O'Sullivan pictured the day after his operation at the Marina in Denia.

A Killarney man has spoken about how he flew to Spain to get free treatment on a horror injury picked up in a hometown soccer derby game. 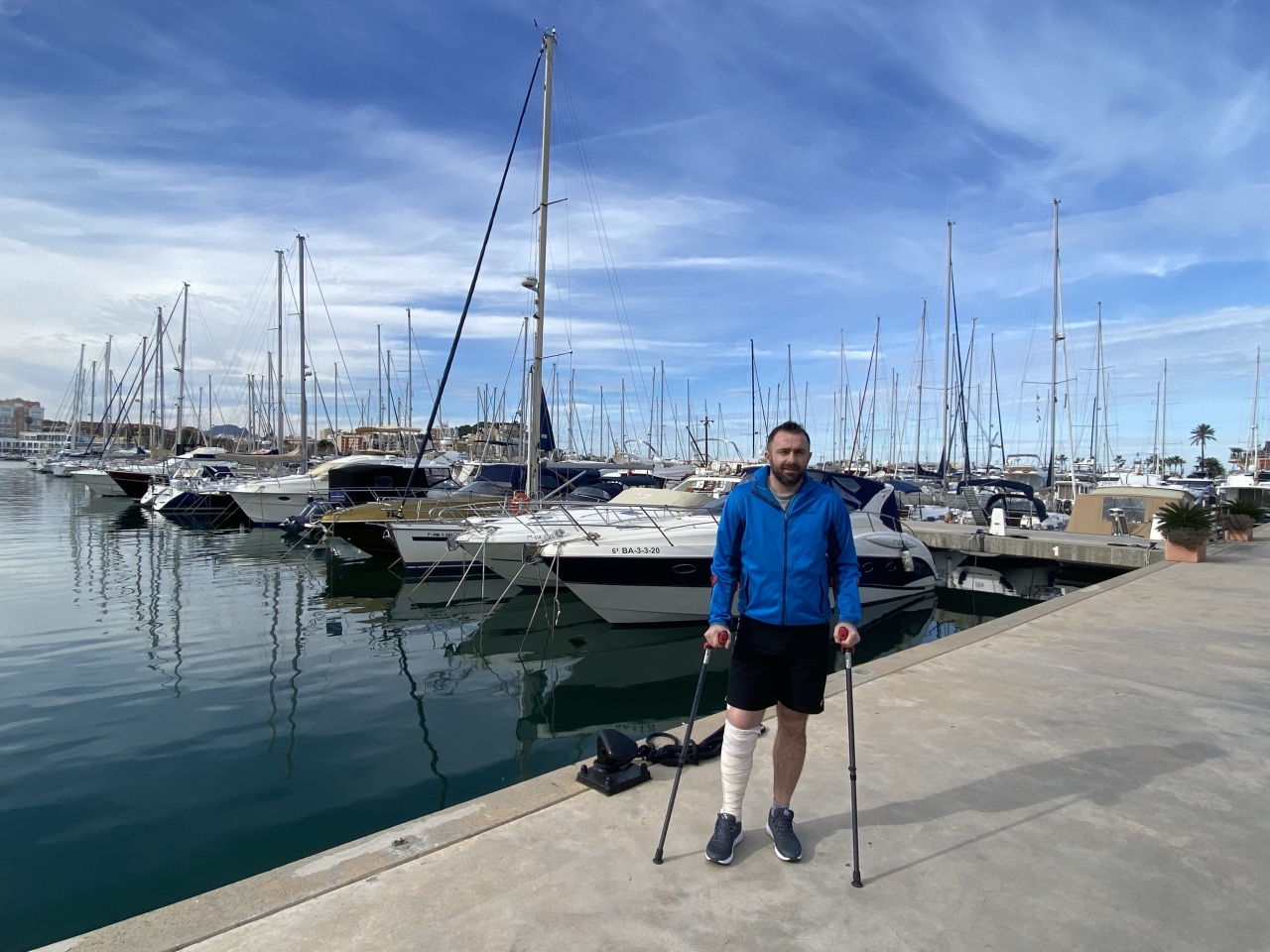 Rory O'Sullivan pictured the day after his operation at the Marina in Denia.

Dad-of-three Rory O’Sullivan (38), flew back to Kerry this week after undergoing surgery for the ACL injury at a hospital in the upmarket seaside city of Dénia.

The facility used by patients travelling with Healthcare Abroad is dubbed ‘the Irish hospital’ by Spanish locals because so many Irish patients now get treatment there.

Striker Rory was able to jump waiting lists at home under the European Union’s Cross-Border Directive, a decade-old scheme which allows patients from any EU country to avail of treatment in another EU country. The HSE here in Ireland reimburse the costs of the operation.

“The treatment I received in the HCB Hospital in Dénia was first class,” said Rory.

“It couldn’t have gone any better. I’d heard about the cross-border scheme from a friend and was advised to call Healthcare Abroad. They helped deal with all the forms and referrals from my GP and when I arrived in Alicante I was collected at the airport by an executive driver and taken to a lovely 4-star hotel for a couple of nights before surgery.

“I had a consultation with my surgeon who has performed so many similar operations before. I felt reassured straight away. The operation itself went very well. I didn’t feel a thing.”

Rory was injured 13 months ago while playing for Killarney Athletic against local rivals Killarney Celtic.

“It wasn’t even a tackle which caused the injury. I fell awkwardly when my foot went into a divot on the pitch. I could hear the ‘pop’ from it. Players on the Celtic team also heard it. I felt sick,” said the Killarney man.

“I was actually feeling really fit - fitter than I had ever been - so to pick up the injury was tough to take.”

Rory had a number of bookings with clinics in Ireland but work and family commitments and COVID led to various delays.

“The insurance I had only covered less than half of any surgery costs, so I began to look into it further and realised that the full cost of the operation I badly needed could be covered under the EU Cross Border Scheme,” said the data analyst.

“I just had to pay for my flights and the hotel, and the hotel was very cheap because of the arrangement they have with Healthcare Abroad.”

Rory, a UEFA-badged coach, is urging anyone with similar injuries to get a flight to Spain for fast-track surgery.

“It just makes sense,” he said.

“Your only costs are the Ryanair flights and hotel, which was 4-star and included breakfast and a four-course evening meal for an extra tenner. The sun was shining when I was there in early January and that just lifts you too.

“Healthcare Abroad meet patients at the airport before you leave and then their team picks you up in Spain and takes you to the hotel too. It really is first class. I am happy to talk to anyone about my experience if anyone wants to hear first-hand how it all works.”

Healthcare Abroad Ireland works alongside the HSE to assist patients through the Cross Border Scheme, helps to complete the paperwork and liaise with Irish GPs. Any treatment offered by the HSE can be treated abroad under the EU legislation. Details of some of the operations available can be found on www.healthcareabroad.ie.

“We are delighted that Rory had a very successful operation and is now well on his way to a full recovery," a Healthcare Abroad spokesperson said. "We wish him every success too with his coaching in the time ahead.”