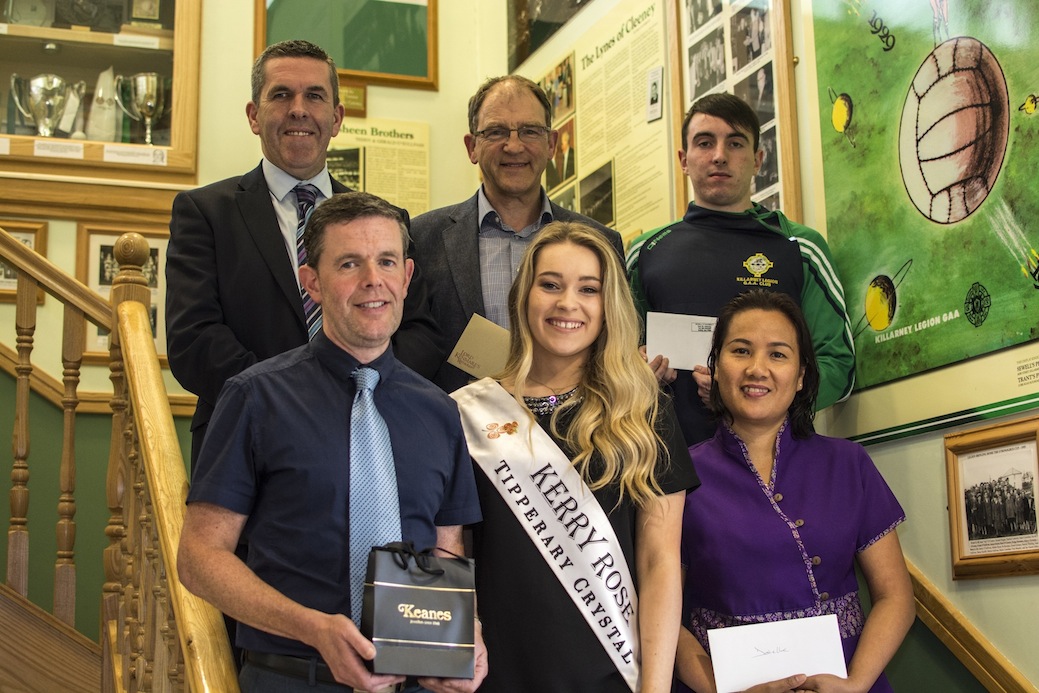 WE WISH our Kerry Rose Danielle O’Sullivan the very best as she makes the short trip from Killarney to the Dome for the Rose of Tralee International Festival.

The Killarney native will be among 65 Roses from all over the world who will take part in this year’s extended festival, from August 17 to 23.

Danielle’s club mates at Legion GAA Club are among her many supporters, as are her colleagues from the Killarney Grand Hotel.

The 2016 Kerry Rose played football with Killarney Legion and last night the club held a reception for Danielle where those wishing her well included her coach at juvenile level Paudie Breen.

“Many thanks to Dave Randles of Randles Bros, Tina Moynihan of Lela Thai Spa, Sean Murphy of Lord Kenmare’s, Paul Trant of Keanes Jewellers and Ian Trant of Sewells Pharmacy who presented Danielle with her gifts, including her own personalised Legion jersey. The whole club wishes Danielle the very best of luck in the upcoming Rose of Tralee Festival.”

The 23-year-old, a Masters student at University of Limerick, said: “I feel so thankful and privileged to be given the opportunity to represent my county at this year’s Rose of Tralee, and look forward to the adventure ahead.”

Prior to arriving in Tralee, Danielle will embark on a five-day tour taking in some of Ireland’s top tourism landmarks.

The format for this year’s Rose of Tralee International Festival has changed to allow every Rose travel to Tralee to enjoy the event in its entirety.

Each Rose who takes part in the qualifying selections, also presented by Dáithí Ó Sé in the Dome, on either August 17 or 18, will find out on August 21 if she will be appearing on the televised selections on August 22 or 23. However, the Kerry Rose will be the only one guaranteed a place on the live TV selection.

Killarney Magazine offers a sparkling reflection of our town