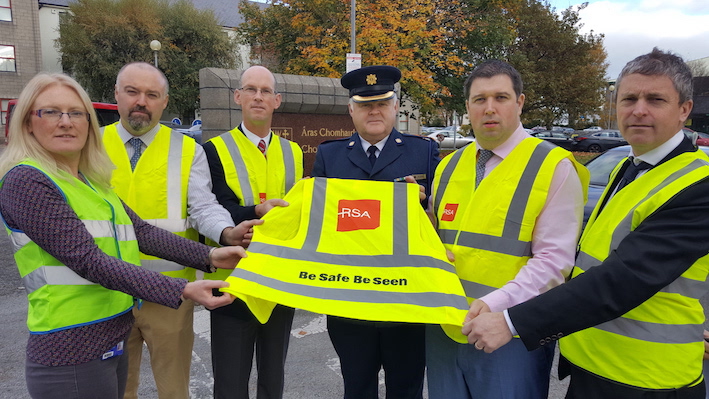 THE Kerry Joint Policing Committee is calling on all road users in Kerry to exercise care over the winter months and to ‘Be Safe and Be Seen’ on the county’s roads. The committee has encouraged the use of high visibility clothing and is asking all road users to ensure lights are fully functional on their bicycles, motorcycles and vehicles.

Speaking at a meeting of the Kerry Joint Policing Committee today, the Chief Superintendent of the Kerry Garda Division, Con Cadogan, said: “An Garda Síochána and Kerry County Council and the members of the Kerry Joint Policing Committee are asking people to wear high visibility clothing at this time of the year when natural light is reduced. You cannot expect other road-users to see you if you are not visible to them – wearing a high-vis vest can make a life-saving difference.

“We would also ask motorists to check their lights are working properly as driving with defective lights is both unacceptable and highly dangerous. A survey by the Road Safety Authority found that eight per cent of vehicles had at least one defective light. The message is to get it fixed now for your benefit and the benefit of other road users,’ he said.

The chairman of the Kerry Joint Policing Committee, Cllr Niall Kelleher, said the aim of the ‘Be Safe and Be Seen’ campaign – which is run by An Garda Síochána and the Road Safety Authority – is to reduce road deaths and accidents on the county’s roads.

“Sadly we have had six fatalities so far this year on Kerry roads and we don’t want the horror of such an incident to be visited on any more families. Everyone on the road has a role to play in slowing down, driving with care and ultimately reducing road accidents and deaths,” said Cllr Kelleher.

Meanwhile, the Kerry Joint Policing Committee is encouraging homeowners to ‘Lock Up and Light Up’ their homes over the winter period to deter burglars. It’s part of a nationwide campaign to encourage homeowners to be more security conscious.

“Burglaries traditionally rise during the longer winter evenings and nights,” said Chief Superintendent Cadogan. “A number of simple measures can help to deter burglars such as using timers on lights if your home is unoccupied, locking all doors and windows, storing keys away from windows and letterboxes and using home alarm systems.”

‘There has been a fall in the number of burglaries in the Kerry Division – down 59% to date this year compared to the same period last year – which is due to a number of factors included the Garda’s Operation Thor and increased awareness and vigilance in communities. But we want people to continue to be aware of the risks and take the necessary precautions,’ said the Chief Superintendent.