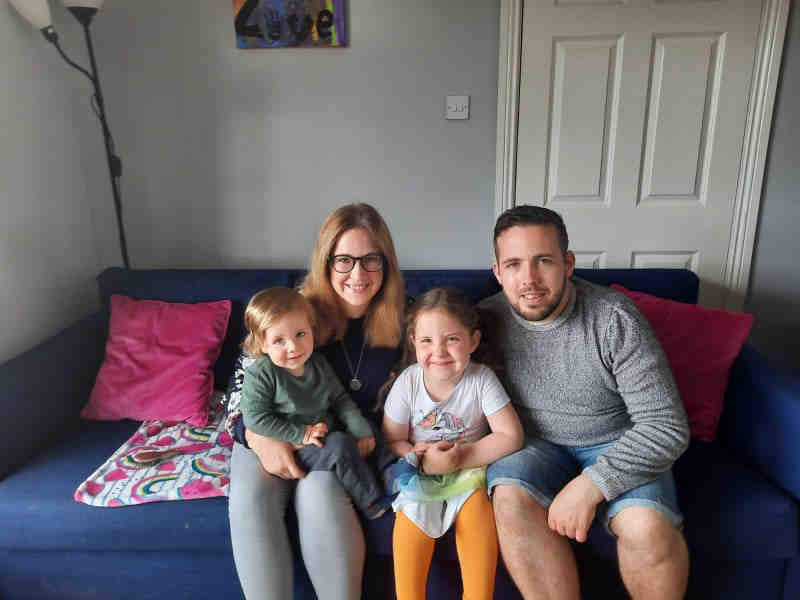 GRATEFUL: Parents Geraldine Dunleavy and Andrew Foley, pictured with one-year-old Adam and four-year-old Alannah, are grateful to the community for their support as Alannah undergoes weekly chemotherapy.

The Killorglin community are rallying to help a local family whose little girl is facing chemotherapy to help save her sight.

Four-year-old Alannah Foley is facing weekly trips to Dublin after being diagnosed with Neurofibromatosis Type 1 (NF1), a condition that can cause benign tumours to grow on nerve tissue. In order halt the growth and stop it pressing on her vision her mom Geraldine Dunleavy and dad Andrew Foley are facing weekly trips to Tralee every Thursday to University Hospital Kerry for blood tests followed by a long trip to Dublin each Friday.

Originally Alannah and her family were to make the trip to Cork for the treatment but due to her first round taking place the day of the cyberattack they couldn't get their scheduled appointments at the Mercy Hospital.
And facing the cost of travel to Dublin which will last over over a year, their good friend Kevin Sheehan set up the GoFundMe: 'Alannah and Polly's Fight for Sight' page which has so far raised over €12,000 of the €20,000 goal.

After a trip to the GP they were referred to a neurologist in January 2019. And over that summer Alannah started to appear wobbly and dizzy. She was referred to Cork from her GP and two days later had an MRI which was diagnosed as a tumour which had a build up fluid on her brain. After further testing it turned out to be benign and she was fitted with a shunt to drain the fluid away from her brain down through her stomach. Her parents were advised that the best course of action was to watch and wait.

"We were stunned. It meant trips to Dublin every three months for eye exams, then 10 days later MRIs and 10 days after that travelling up for the results," her mom Geraldine told the Killarney Advertiser.

"When she had her last eye exam they felt it was impacting on her eyesight and opted for chemo."

Andrew, a chef, works as the deli manager in Keane's SuperValu in Killorglin and Geraldine works in childcare part-time. They also have a one-year-old son called Adam.

"we're only at the start of it really," she said. "Polly, Alannah's port, got fitted the day of the cyber attack which meant she could not be put on the system in the Mercy Hospital."

The couple, who live in Lynch Heights, head to Dublin every Friday leaving home at 5.30am and it's a late journey home as they get stuck in evening traffic. With the cost of travel and other expenses, Kevin opted to help out.

Geraldine said that she and fiancee Andrew are overwhelmed by the support of the community.

"We're blown away by the support we've received. People keep stopping and asking us how she is and the kindness has been overwhelming."

They're hoping Alannah will be finished her treatment successfully by August or September 2022 before she starts Junior Infants.

"She's a trouper. She does get tired over the weekend and struggles a bit after the treatment but she ends every day with a smile on her face."

The buzz is back in town as pubs and restaurants reopen