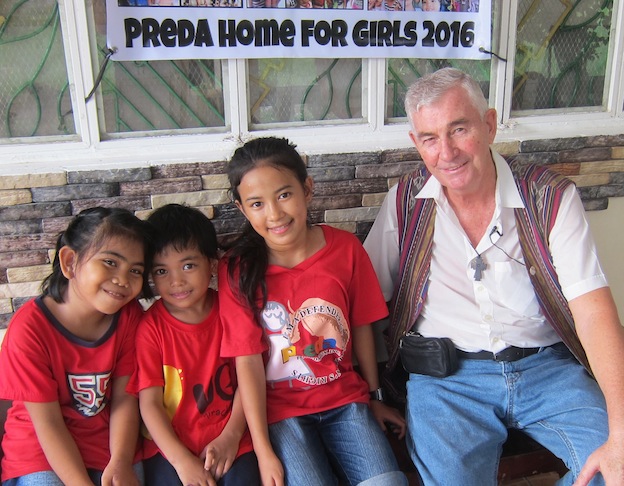 FR SHAY CULLEN is to be honoured in Killarney with the 2016 Hugh O’Flaherty International Humanitarian Award. The Dublin-born Columban Missionary in the Philippines will receive the award from Mayor of Killarney Municipal Authority Cllr Brendan Cronin on Saturday evening, November 5, at a ceremony in the Killarney Avenue Hotel.

This year marks the ninth year of the memorial commemoration of Monsignor O’Flaherty organised to raise awareness of the humanitarian work he carried out during World War Two. Together with his colleagues in the Rome Escape Line, he saved over 6,500 people from the clutches of the Nazis who had occupied Rome at the time.

On October 30, 2013, on the 50th anniversary of his death, a permanent memorial to Monsignor O’Flaherty was unveiled in Killarney town centre. The memorial is a life-size sculpture of the monsignor by Valentia based artist Alan Ryan Hall.

On May 8 this year, a plaque commemorating the Monsignor was unveiled at the German College, Vatican City, Rome where he lived from 1938 until 1960 and from where he organised the WW2 Rome Escape Line.

“Over the past few months nominations have been invited for people or organisations, which have displayed the same humanitarian ideals and principals of the monsignor and would be deserving of this award,” said Jerry O’Grady, chairman of the Hugh O’Flaherty Memorial Committee. “A shortlist of 11 nominees was considered by the independent award panel.”

He added: “Fr Shay has given his life to protecting the human rights of oppressed and exploited children and has fearlessly challenged those who were not prepared to shoulder their responsibilities, including local vested interests, local and national government in the Philippines and the USA Government.”

Fr Cullen was nominated by Matt Moran from Cork. Born in Dublin, 27 March 1943, educated at Presentation College, Glasthule, Co Dublin, Fr Shay completed his college education at St Columban’s, Dalgan Park, Navan, and was ordained in April 1969. He was subsequently assigned to parishes in Zambales and Olongapo City, Subic Bay, on the main Philippines island of Luzon.

Father Shay Cullen established the PREDA Foundation in Olongapo City, in the Philippines, in 1974 to promote human rights, justice and peace. Believing that poverty, violence and child abuse are barriers to peace and give rise to extremism, he strives to eliminate child abuse and promote respect for children’s rights. He works for peace by working to change the unjust economic political and social structures and attitudes that allow such abuse. His mission for justice and peace is ecumenical; open to people of all faiths. It is based on taking a stand for human rights and protecting the dignity of every person, in particular exploited women and children.

Upon hearing the news of the award, Fr Shay said, “On behalf of those children we have rescued and those human rights workers who like Monsignor Hugh, continue to work for the unjustly imprisoned, the refugees trying to escape from Isis and war and those risking their lives to help them escape, I gladly accept the award.”

Admission to the Humanitarian Award Ceremony in the Killarney Avenue Hotel on Saturday evening, November 5, is free of charge but places are limited and can be reserved in advance through the Killarney Chamber Office on Beech Road (064) 6637928 / e-mail chamber@killarney.ie

Pictured above: Fr Shay Cullen with schoolchildren at the PREDA Foundation.

Deerpark to tee up in memory of Danny