Kerry County Council have been warned that they “will fail the people of Killarney for decades” if they don’t include a multi-storey car park in the first phase of the Áras Phádraig redevelopment. 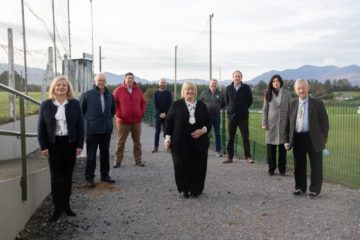 Plans for the site, which has been idle since the Franciscan Friars donated it to the people of Killarney in 2009, were finally unveiled at Wednesday’s Killarney Municipal District Meeting. The meeting took place at Kilcummin GAA clubhouse at the invitation of Mayor Marie Moloney who lives in the area. Each term a mayor invites a municipal meeting to their home-patch.

Plans include a theatre, and outdoor public plaza, office space, and a 400-space car park and a medical centre.

Further down the line, there are plans to build a multi-storey car park to the rear of the new development but Kerry County Council officials said this part of the construction will not happen until the other elements were up and running.

The project is being funded by the Urban Regeneration Development Fund for Killarney which was announced in March this year. A total of €21 million has been set aside for the regeneration of the town centre of which Kerry County Council is providing €5.5m.

The town centre project is wide-ranging and includes the development of a craft quarter in the town centre, works on the Jarvey Stand at the HaHa, and further potential for more outdoor dining facilities.

The Áras Phádraig plan is the first phase of this broad project and details were presented to the Killarney Municipal District meeting by engineer David Doyle.

Elected officials broadly welcomed the new plans but called for the multi-storey car park to be a given priority over the other elements of the project.

“By not providing a multi-storey car park we will have failed the people of Killarney for decades,” said Cllr Niall Kelleher, who is also president of Killarney Chamber of Commerce and Tourism.

Mr Doyle explained that Kerry County Council is governed by public spending rules and that building a multi-storey car park ahead, or alongside, the rest of the project would not be possible at this time.