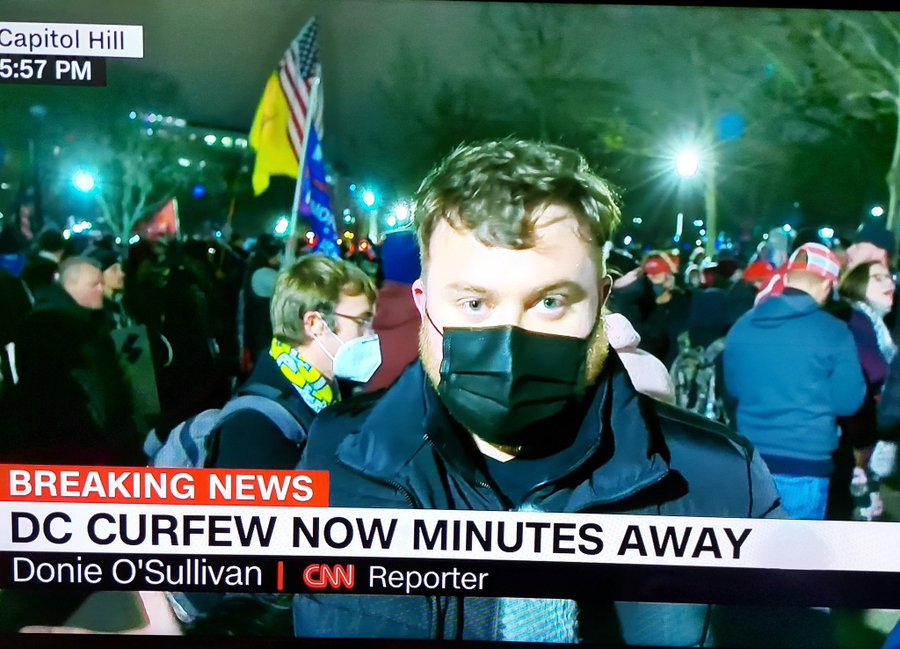 ON THE FRONTLINE: Cahersiveen man Donie O'Sullivan was one of CNN's 'on the ground reporters' during a chaotic night in Washington DC.

A Cahersiveen man played a starring role in CNN’s coverage of the Washington DC riots on Wednesday night.

Donie O’Sullivan was one of several ‘on the ground’ reporters covering the historic and disturbing events as they unfolded.

He spent much of his time on the police frontline sharing foot space with riot-gear-clad officers.

During several broadcasts, his CNN anchor Wolf Blitzer could be heard saying “stay safe Donie” as the South Kerry native continued to deliver live and calm commentary from the streets of DC.

O’Sullivan has been working as a reporter with CNN for almost five years after starting his career with Storyful in New York and Dublin. He has a masters’ degree in Political Science and Government from Queen’s University Belfast as well as a degree in History, Politics and International Relations from University College Dublin.

His impressive reporting skills, despite the volatile situation he found himself in, won the hearts of millions of viewers and broadcasting specialists worldwide. At one point #donie was trending on Twitter.

Mayor of Kerry, Patrick Connor Scarteen is calling for Kerry County Council to honour O’Sullivan in some way.

“I would like to honour the good work by Donie O'Sullivan USA, a native of Cahersiveen in covering the US Presidential Election,” he told the Killarney Advertiser. “He has played a huge part in reporting to the world the threat to democracy in the USA in a factual, interesting and true way. He has also outlined the dangers social media can have on elections and how nasty politics in the USA has become. The people of Cahersiveen and Kerry are very proud of him.”

Donie will also be chatting to Ryan Tubridy on The Late Late Show tonight (Friday).

For more coverage of the Killarney Advertiser’s US election riots turn to our Home and Away section on page 36.