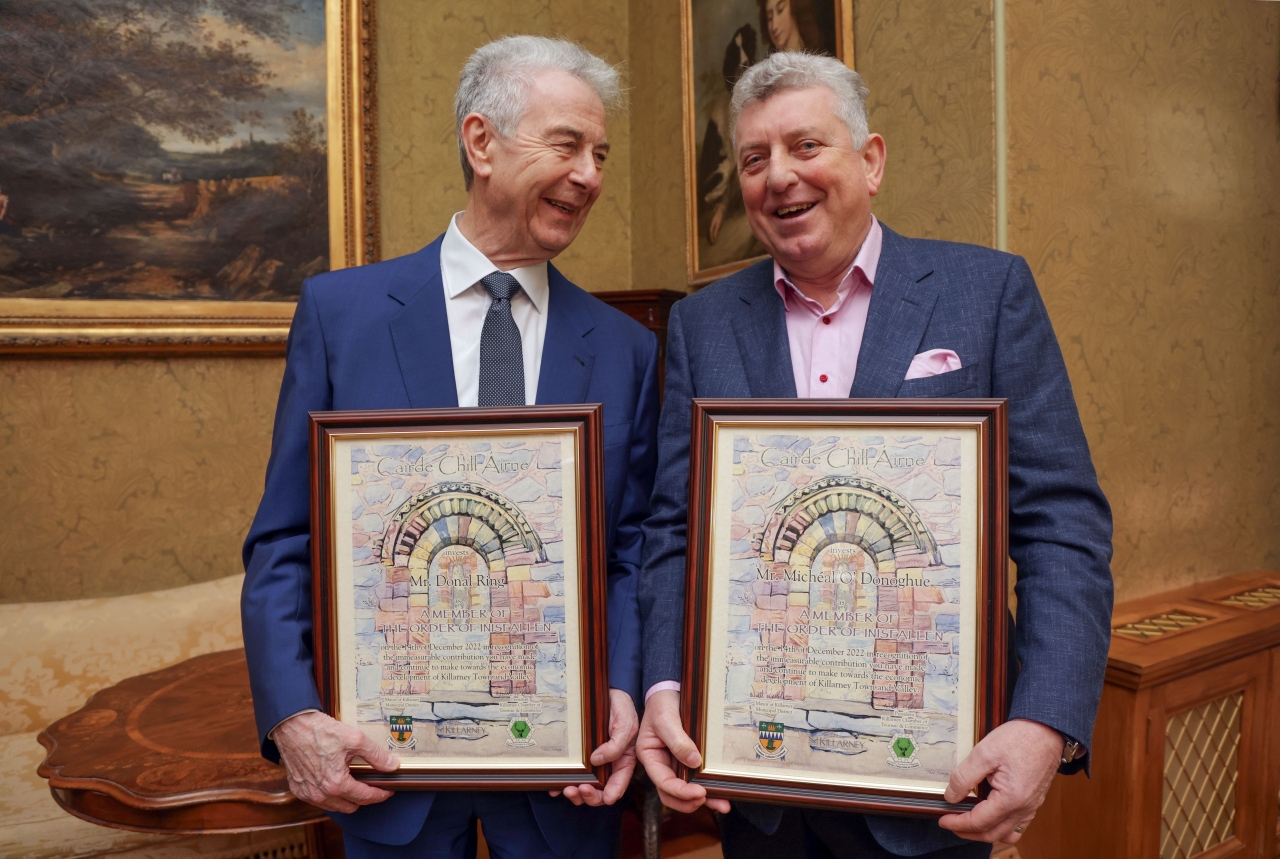 HONOUR: Brothers-in-law Donal Ring (left) and Michael O’Donoghue (right) were inducted into the Order of Innisfallen at a reception in historic Muckross House in Killarney on Wednesday evening. Photo: Valerie O'Sullivan

Two entrepreneurs who have built up an empire creating thousands of jobs, from very humble beginnings, have been honoured in recognition of the enormous contribution they have made to the economic and social fabric of the community in which they live. 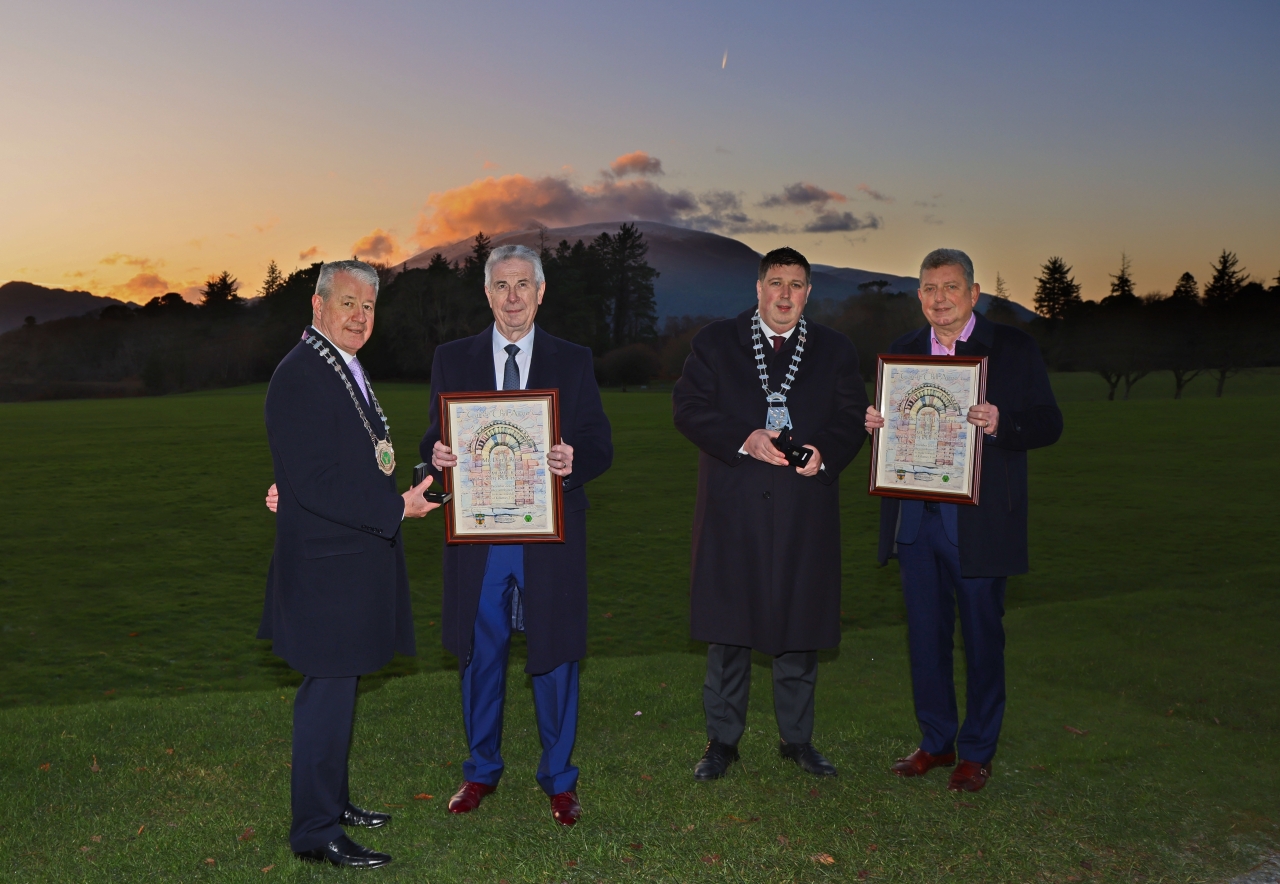 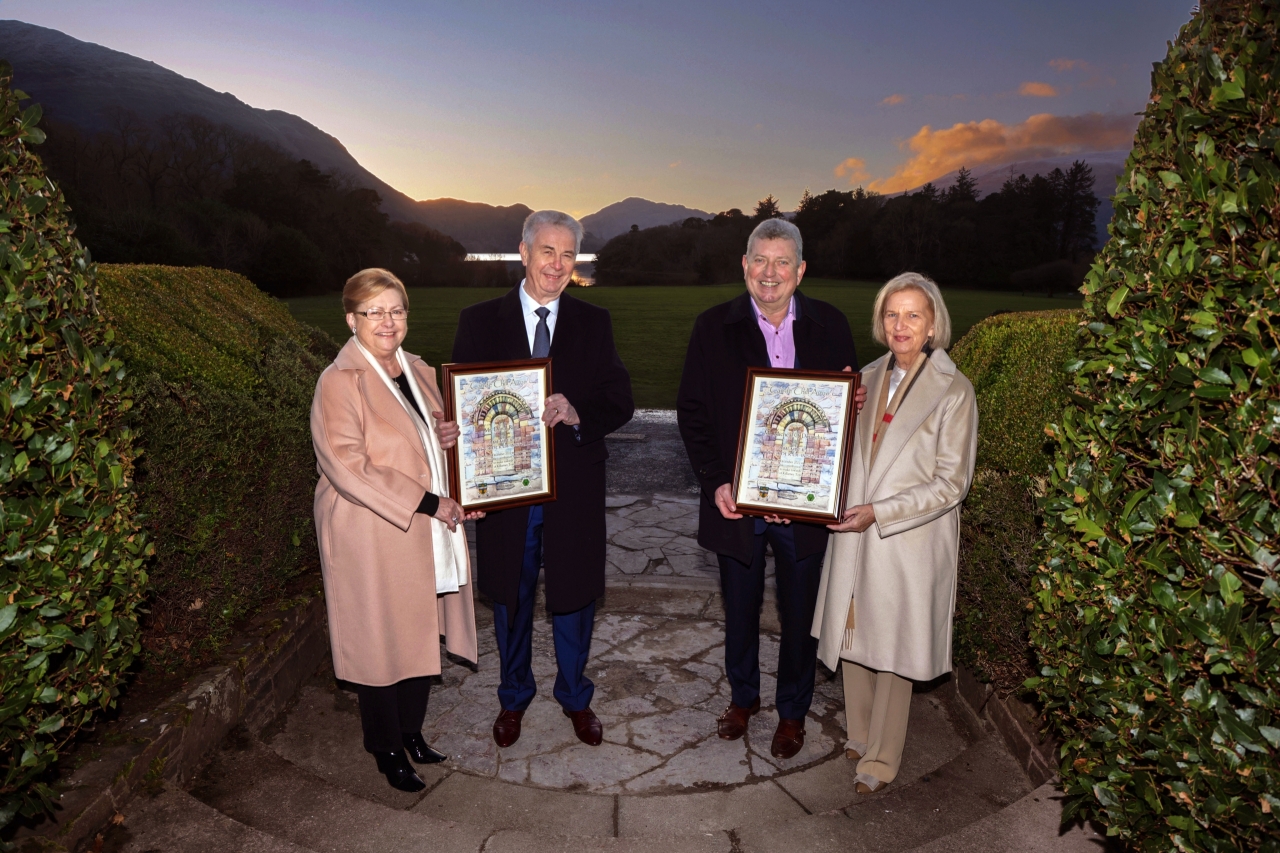 Donal Ring (2nd left) along with his brother-in-law Michael O’Donoghue were inducted into the Order of Innisfallen at a reception in historic Muckross House in Killarney yesterday evening (Wednesday). Donie is pictured with his wife Noreen Ring and Michael with is wife Mary. Photo: Valerie O'Sullivan 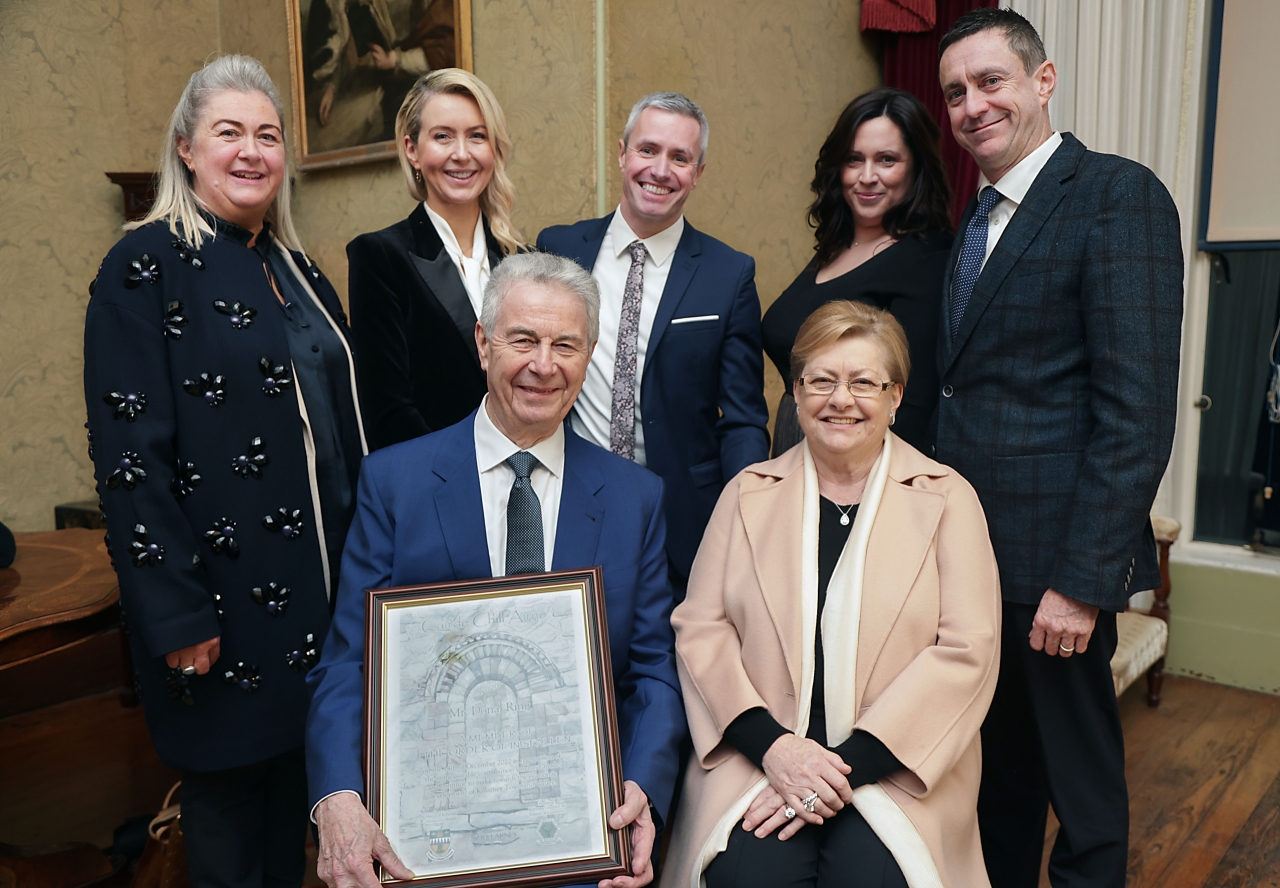 Donal Ring (sitting) along with his brother-in-law Michael O’Donoghue were inducted into the Order of Innisfallen at a reception in the historic Muckross House in Killarney on Wednesday evening. Donal is pictured with his wife Noreen daughters Angela Ring Gemma Ring son-in-law Paul O'Neill daughter-in-law Caroline Ring and his son Alan Ring. Photo: Valerie O'Sullivan

Brothers-in-law Donal Ring and Michael O’Donoghue were inducted into the Order of Innisfallen at a reception in historic Muckross House in Killarney on Wednesday evening.

The awards scheme, a collaboration between Killarney Chamber of Tourism and Commerce and Kerry County Council, was initiated in 2005 to recognise outstanding contributions by people to the economic development of the town and, in particular, its tourism industry.

Donal Ring is the founder of Munster Joinery and the O'Donoghue Ring Hotels Collection. He and his brother, Patrick, since deceased, established Munster Joinery in 1973 with a small operation at the rear of their family home in Ballydesmond, on the Kerry-Cork border.

The company employs in excess of 1,800 people with a further 900 on the payroll in the UK and has grown to become one of the largest manufacturers of windows and doors in Europe. Next year they will celebrate 50 years in business.

In 1978, he and his wife, Noreen (née O’Donoghue) purchased the property then known as the East Avenue Hotel – now the 66-bedroom Killarney Avenue Hotel.

Noreen’s brother, Michael O’Donoghue, then a qualified electrician, joined them in the hospitality business at that stage and became one of the tourism industry’s most successful and respected operators for over 40 years.

The company expanded in 1989 with the purchase of the Killarney Towers Hotel, with 182 bedrooms, and the 52-bedroom River Island Hotel in Castleisland before the flagship Killarney Plaza Hotel and Spa opened in 2002 with 198 bedrooms.

Donal and Michael also expanded into the UK hospitality market with Centre Island Hotels which now has hotel properties based in Liverpool, Manchester and Birmingham.

At the induction ceremony in Muckross House, President of Killarney Chamber of Tourism and Commerce, Niall Kelleher, said both Donal Ring and Michael O’Donoghue are prime examples of what can be achieved in life through hard work and sheer determination and they have set a great example for future generations to follow.

“Wherever and whenever you see a very successful business, it is always worth reflecting that, somewhere along the way, someone made a very courageous decision. Donal Ring and Michael O’Donoghue are a wonderful example of how such courageous decisions can pay off so handsomely,” he said.

Deputy Mayor of Killarney, Cllr John O’Donoghue, remarked: “There is scarcely a family in Killarney, or indeed its hinterland, who have not benefitted from the work of these two men, be it through employment or the services they provide. We are extremely fortunate here in Killarney to have them both to the fore of social and economic life within our town."

MC at the ceremony, Geraldine Rosney, said Donal Ring was a remarkable businessman whose contribution to the community has been “absolutely enormous”.

“He has every right to be proud of what he has done and achieved and for what he continues to do and achieve. May the next chapter in the Munster Joinery story be as successful as the story has been so far, under your visionary leadership,” she remarked.

She said when Michael O’Donoghue commits himself to something, he does so totally and when he dreams, he dreams big.

“What he has achieved, what he has done and what he has contributed to the overall benefit and well-being of Killarney and Kerry is spectacular,” she added.

Innisfallen Island is one of Killarney’s best-known and most historic heritage sites. It began as a place of healing and became a major centre of learning where the Annals of Innisfallen, the oldest contemporary source of the history of Munster, were scripted.

Ukrainians sing from the heart as a thank you to community