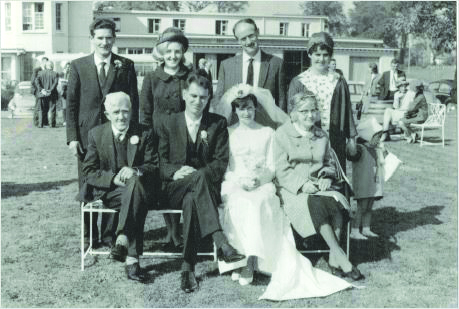 Joan and Michael Griffin pose with family outside The Gleneagle Hotel, Killarney, on their wedding day in September 1966.

WHAT better way to celebrate 50 years of love and marriage than by returning to the place where it all began? Having held their wedding breakfast in The Gleneagle Hotel on September 21, 1966, Mr and Mrs Michael and Joan Griffin returned to the famous Killarney venue to mark their golden wedding anniversary.

Michael Griffin and Joan Mullins, both originally from Tralee, were married in St John’s Parish Church in Tralee on September 21, 1966, before travelling onto Killarney afterwards where The Gleneagle hosted the newlyweds and 80 members of their family and friends. “Our wedding breakfast took place in The Gleneagle Hotel, where we were treated very well and so decided to book the same venue 50 years later,” said Joan Griffin.

The happy couple, who now reside in Caherciveen, were once again joined for a celebratory meal at the hotel by 80 friends and family members including their children and grandchildren. “We were overwhelmed with our party as were all our friends too,” said Joan. “The staff looked after us so well and management were excellent; we thank them for a very memorable occasion.”

Joan and Michael Griffin pose with family outside The Gleneagle Hotel, Killarney, on their wedding day in September 1966.

Tommy Tiernan embarks on ‘a world tour of the same hotel’