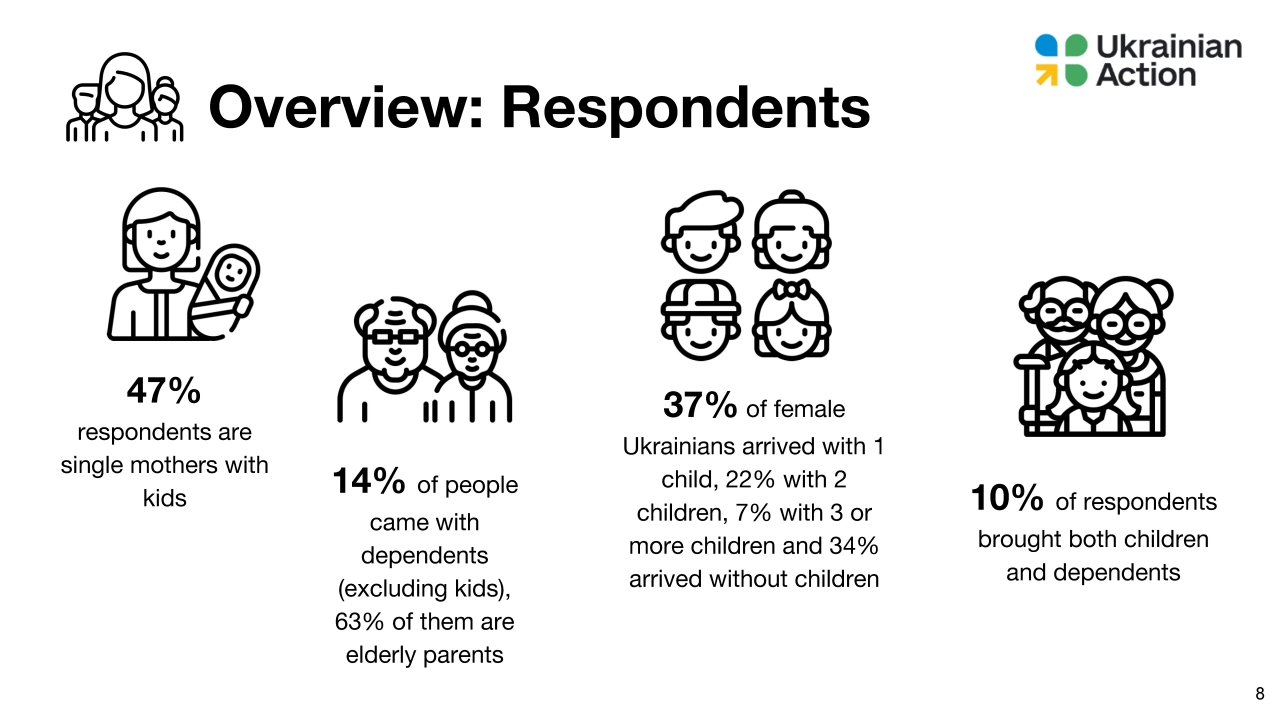 One in five Ukrainian refugees who have arrived in Ireland since the war broke out have already found employment, while almost two thirds of the remainder are actively looking for work.

It was established by a group of Ukrainian and Irish volunteers united by the idea to help Ukraine and Ukrainians in the times of the war and beyond. Their main mission is to be the voice and action for Ukrainians in Ireland, to provide humanitarian support to Ukraine, and to show and promote a positive image of modern Ukraine in Ireland.

The main purpose of the survey is to give a voice to Ukrainians fleeing the war and to learn about the main challenges they face. Some 2,191 adult Ukrainian refugees living in the Republic of Ireland were surveyed.

“It is important for UAСT to understand the real pains and problems of Ukrainians from people directly," Olena Redrugina, a co-founder of UAСT, said.

"We understand that many Ukrainians are spread across Ireland, and this survey allowed us to reach out to the most remote locations. This is our first survey, which gave us lots of unexpected insights. It triggered many new ideas and insights within UACT and we hope this information will be of use to everyone involved.”

Of those who have found work, only 5% have found a job matching their professional qualifications. Two out of every five (38%) refugees looking for a job do not have a bank account/card. Mothers face the greatest difficulties finding employment. Although 20% of mothers have found jobs and 43% are actively looking, 22% are unable to work because of child commitments or health conditions.

One of the biggest issues facing Ukrainian refugees in accessing language courses, with almost half of all respondents speaking little or no English and 63% experiencing a language barrier in their search for a job. More than half of Ukrainians are studying English by themselves using online resources. 40% of them are attending English classes in person.

Most respondents are happy with the provided education. However, frequent relocation is affecting and interrupting language studies. Respondents expressed a strong desire to have more conversational practice and more frequency of classes (more than once per week). With most of the courses oriented towards the unemployed, those who have found jobs struggle to find education outside of working hours.

90% of Ukrainians expressed deep gratitude to the Irish Government and the Irish people for being able to live in safety. Almost two-thirds of Ukrainians are willing to actively contribute to the economy of Ireland, and half of the displaced are actively looking for a job and actively studying English.

Most of the Ukrainian refugee respondents said they did not have issues with services and are satisfied overall. Over 90% are highly satisfied with how they were granted Temporary Protection and a PPS Number. On the other hand, 37% have not received a Medical Card and have issues finding a GP. Some 70% of Ukrainians have not received a bank card. Only 3% exchanged their Ukrainian driving license for an Irish one.